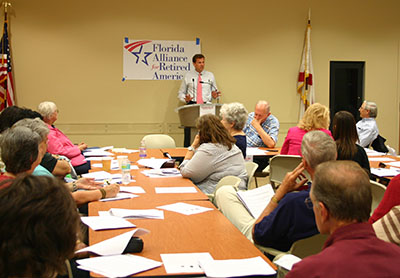 The Florida Alliance for Retired Americans held a forum on the Affordable Healthcare Act on Tuesday, April 9 at the Wellington library. Attorney Matthew Vanden Bosch addressed the legal aspects of the act while FLARA President Tony Fransetta explained how it will affect people.

Bosch said the Affordable Care Act was found constitutional by the U.S. Supreme Court in June 2012 when it ruled in a 5-4 decision that the requirement that most Americans buy health insurance or pay a penalty was authorized by Congress’s power to levy taxes and regulate commerce.

Also at issue was an expansion of Medicaid that required the states to accept the Affordable Healthcare Act or face the withholding of Medicaid benefits to those states. The court found that states could opt out of that provision.

Fransetta said the underlying driving force behind the case that went before the court was the insurance companies.

“Nowhere in the world in other developed countries do the insurance companies have the power and political might that they do in America,” Fransetta said. “You can go to Germany and if you don’t like your healthcare plan, you can change and go to another one. They may have as many as 60 different healthcare plans, but they have national healthcare. It has been established many years. The government regulates the insurance companies.”

Fransetta said that in America, each state regulates health insurance differently. “If you go to New York and you buy an insurance policy, chances are you’re going to get pretty good insurance. It’s regulated there by the state extensively,” he said. “If you go to Louisiana, it won’t cost you as much, but you’re not going to get nowhere near as much.”
ABOVE: Attorney Matthew Vanden Bosch speaks at a Florida Alliance for Retired Americans forum last week at the Wellington library.