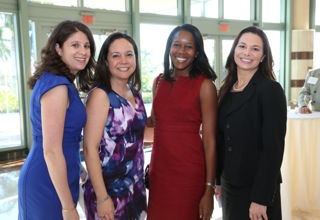 “This event was such a huge success, and for the third year in a row, we exceeded our fundraising goal,” said Samantha Schosberg Feuer, co-founder and board member of the Women’s Foundation. “Investing in women as problem solvers and leaders accelerates a shift toward gender equality and justice. Women have critical and different perspectives on the world’s greatest social and economic challenges. The young girls who are able to attend the Girls Leadership Institute due to the funds we raised at Raise the Bar are an investment in our future. They are our daughters, granddaughters and community leaders.”

“We couldn’t have asked for a better turnout to the Raise the Bar event,” said Nicole Atkinson, shareholder of Gunster and co-chair of Raise the Bar. “It’s rewarding to see so many in our community supporting programs like this which invest in the future of young women.”

This event was made possible through the generous support of PNC Bank, Florida Power & Light and Equestrian Sport Productions, and more than 50 other generous personal and corporate sponsors.

The sixth Girls Leadership Institute, which will be held in the fall, is a program of the Women’s Foundation of Palm Beach County for young women who show promise as leaders, but do not have the opportunities or resources to hone those skills. The Women’s Foundation was established in 2007 by a group of local leaders who share a commitment to investing in the leadership of women and girls.