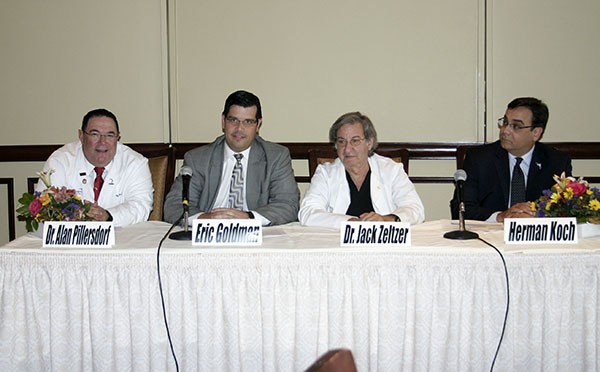 Healthcare reform was the topic at the Central Palm Beach County Chamber of Commerce luncheon Monday at the Wycliffe Golf & Country Club.

A panel of doctors and other healthcare providers gave their take on what effect the Patient Protection & Affordable Healthcare Act, often referred to as “Obamacare,” will have.

Moderator Dr. David Soria said the changes in healthcare are confusing and anxiety-provoking because people do not know what to expect. “It’s hard to decipher, and whoever you talk to can give you a different story, and that doesn’t go just for you all, it goes for most of us health professionals,” he said.

Dr. Alan Pillersdorf asserted that hospitals are likely to take the biggest hit under the new healthcare law. In Florida, most of the legislative issues center on healthcare, he said. Most recently, the state’s healthcare discussions have centered on what he called the “flip-flop” of Gov. Rick Scott in taking Medicaid money from the federal government.

“Why didn’t he want to take the money? The reason is very simple. The Florida budget by law has to be balanced every year, $74.3 billion, and of that $23 billion is Medicaid,” Pillersdorf said. “If you add 1.2 million lives conservatively to the Medicaid rolls of this state, we are going to have to pay another $19 billion, so where is that going to come from? You have to balance the budget. How can they figure out a problem that is completely dominated by Washington?”

He said other states that have taken Medicaid money, such as Arizona and Maine, now regret it. “They realize that they have caused themselves probably to become quickly bankrupt,” he said. “This law basically is an unfunded mandate.”

Palms West Hospital CEO Eric Goldman said the Affordable Healthcare Act is probably the most difficult topic facing everyone in the industry. Goldman said his employer, HCA, does not have a position on the law because there are still too many questions to be answered.

“There is still a looming, looming question about how do we pay for all this and how do we make it work in the end,” Goldman said. “The reality of it is at the core beliefs of where we’re at, should people have access to healthcare, regardless of whose responsibility it is to pay for it?”

Goldman said that upon trying to review the 2,100-page document, he thought stopping healthcare fraud was a major initiative of the plan. “There’s billions in healthcare fraud occurring across the country annually,” he noted.

The act also covers early retirees between 55 and 65 years old. “That happens to be a challenge for a lot of people who exit the work force prior to Medicare age,” he said. “There’s elimination of pre-existing conditions, coverage of children until they reach the age of 26.”

Mammography and colonoscopy screenings will be available without co-payments or deductibles. Insurance companies will no longer be able to rescind coverage if a client is diagnosed with a serious disease. “There would not be an opportunity for an insurance company to go back and look for a technicality in a patient’s application and retroactively deny coverage,” Goldman said.

Dr. Jack Zeltzer said that describing the Affordable Healthcare Act as “Obamacare” does it a disservice.

He said few people have actually read the Affordable Healthcare Act. “We get bits and pieces, sound bites and snippets, and we really don’t have a collated perspective of what’s going on,” Zeltzer said. “When 2,100 pages go up to Congress and the person trying to push the bill through says, ‘Sign it, pass it, we’ll worry about it later,’ it really doesn’t seem to make much sense, but that’s the way the thing came through. That being said, there are many things about it that are probably very good and very advantageous.”

One of the biggest questions about the American healthcare system is whether patients are getting value for their dollar. “When we talk about what we’re spending and what are we getting for it, the answer is woefully ‘no,’ because we are way down at the bottom of the list in terms of interim care and all the other parameters in which some Third World countries exceed us,” Zeltzer said. “We spend more to deliver healthcare than any other nation in the world, and yet by standards, in many cases we achieve a lot less. The reason for that is we’re not very good businessmen when it comes to medicine.”

The Institute of Medicine reported recently that the health system wastes $750 billion a year, he said. “That’s absolute waste that you could contract and tighten up on without adjusting anything as far as medical costs go,” Zeltzer said.

Herman Koch, community educator for Florida Blue, said the federal government had to do something because the healthcare system as it existed was about to implode, with 17 percent of the gross domestic product being spent on medical needs. “That affected everybody, and it’s going up,” he said. “This year, they’re saying it’s closer to 20 percent. They needed something to come in and intervene.”

He noted that 46.6 million Americans are without health coverage and 4.3 million children are without insurance. “Basically, this is insurance law,” Koch said. “It’s telling insurance companies what they have to do going forward.”

He pointed out that Florida ranks No. 1 in the nation for uninsured people. “People say right away it’s because of the immigration problem,” Koch said. “It’s not. It’s because a lot of people are working two and three jobs and they still can’t afford insurance. Something had to be done.”

Koch said that one of the issues with the Affordable Healthcare Act was that many legislators under the influence of insurance lobbies put clauses in the act that they thought would prevent it from passing.

“Well, guess what? It passed,” he said. “If you want to look up exactly what’s in it, it’s on healthcare.gov. I read all of it. Does anyone have insomnia? That’s a good way to cure it.”