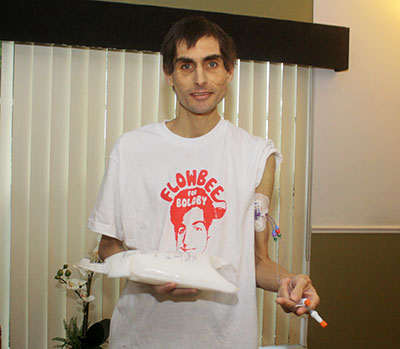 Facing several major surgeries — including a liver transplant — local musician and longtime Town-Crier employee Jason Budjinski has often worried how he will weather his current health crisis. One thing is sure: he won’t do it alone.

Family and friends, along with the Town-Crier and many others in the western communities, will host a benefit for the Jason Budjinski Surgery Relief Fund on Saturday, June 8 from noon to 3 p.m. at the Madison Green Golf Club in Royal Palm Beach.

“People here, along with all my friends from over the years, and even people from as far away as Okeechobee, have reached out to support me,” Budjinski said. “It’s beyond words, the way I feel. My gratitude to everyone can’t be measured.”

The entire community is invited to join for music, fun and food, along with live and silent auctions that will benefit Budjinski’s medical fund.

In 1999, Budjinski was diagnosed with Crohn’s disease and primary sclerosing cholangitis (PSC), an autoimmune disease that affects the liver.

“It’s an autoimmune disease of the bile ducts,” Budjinski explained. “The ducts get narrow and scar, and ultimately it affects the liver.”

Budjinski and his family moved to the western communities in 1979. He grew up in the area, playing little league sports and attending local schools.

“Jason was a fun, lively little kid,” Bray recalled. “He was very curious, and eager to learn about everything. He’s a great guy, a talented musician, a gifted writer and a great person. He more than deserves our support.”

Budjinski is an avid musician and was a fixture in the South Florida music scene for years, playing under the name Billy Boloby.

But while he used to be plugged into an amp making music, Budjinski now spends 12 hours each day plugged in to an IV that feeds his body much-needed nutrients.

Since he began to see symptoms of the diseases, Budjinski’s weight dropped to under 100 lbs., and he has suffered from itching and jaundice, along with pain and fatigue. In April 2012, he was put on the list for a liver transplant. “It’s a very volatile disease,” Budjinski said of PSC.

He noted that the disease causes enzymes in his body to fluctuate dramatically, affecting his position on the transplant list. The Model for End-Stage Liver Disease (MELD) system is used to determine who needs a transplant organ the most. One of the calculations is bilirubin, which measures how effectively the liver excretes bile.

“It’s a point system,” Budjinski said. “Because of my disease, if I go to the lab right now and then go to the lab a week from now, I could have completely different [bilirubin] readings. The last time I had bloodwork done, my bilirubin score was high for average people, but lower than it had been. That caused my MELD score to drop.”

Things grew more complicated when doctors found precancerous cells in his colon. Budjinski must now have his colon removed before he can have the transplant. If he develops colon cancer, he will be kicked off the list and ineligible to receive a new liver.

“If you get colon cancer, you get kicked off,” Budjinski stressed. “Because I have precancerous cells, my situation has been completely re-prioritized.”

But before he can even have surgery, Budjinski must gain weight. At 5’11”, his weight dropped to about 95 lbs., which posed a risk for surgery. Since beginning the IV nutrition, he has already gained more than 15 pounds. “You have to be physically fit to have surgery,” he said. “The better shape you’re in, the better your recovery will be.”

The disease has taken not just a physical toll, but also put him in a precarious financial position. “I haven’t even had surgery yet, and I’ve already been hospitalized twice,” Budjinski said.

Because of his physical state, Budjinski has been unable to perform as a musician, or work the type of hours he did before.

“Surgery and hospital stays are one thing, but when you get a transplant, they put you on a whole new regimen of medicines, some being very expensive,” he said. “Then there’s the loss of wages from not being able to work; then I won’t be able to work at all. I don’t know what to expect.”

Budjinski has worked for the Town-Crier for almost 10 years and currently serves as community editor. A dedicated writer and editor, he is the tireless force behind the newspaper’s e-mail system, helping to put the spotlight on local news.

New Horizons Elementary School Guidance Counselor Lynne Bray has known the Budjinski family for many years and seen firsthand the positive impact Budjinski has had on the community.

Donations will be accepted at the fundraiser, and you can also donate online by visiting www.gofundme.com/2c4qhk.

Budjinski said that the support from the community, friends and family has been invaluable to help him trudge on.

“For all the pain and daily frustrations I suffer, it could be so much worse,” he said. “I could be going through it alone. Knowing everyone is supporting me makes it much more manageable. It gives me something to try to be strong for. Any time I start to feel upset or down on myself, I think of everyone pulling for me. It gives me the extra motivation I need.”

The June 8 fundraiser will take place at the Mar Bar Grille at the Madison Green Golf Club (2001 Crestwood Blvd. North, Royal Palm Beach). Call (863) 484-0110 to RSVP.
ABOVE: Jason Budjinski shows off one of the IV nutrient packs.