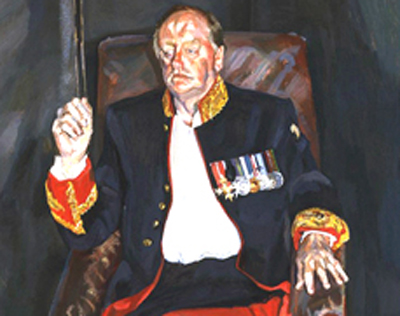 Beginning in May, the Norton Museum of Art is spotlighting major works by iconic artists in its Masterpiece of the Month series. Each exceptional work being showcased has been selected from a private collection by a Norton curator. These pieces have rarely been exhibited publicly. A series of curator-led gallery talks accompanies the monthly installations to explore the significance and context of each work.

The Norton is extremely fortunate to have friends who are serious collectors and support the arts in South Florida, said Cheryl Brutvan, the Norton’s director of curatorial affairs and curator of contemporary art. This series would not be possible without their willingness to loan these masterpieces for public display.

Masterpiece of the Month began May 2 with the display of Lucian Freud’s The Brigadier (2003-2004), a magnificent, life-sized portrait of Andrew Parker Bowles. Bowles, former husband of Camilla Parker Bowles, the current wife of Britain’s Prince Charles, was a friend of Freud for decades. This spectacular portrait of Bowles, the artist’s friend and riding companion, was painted over two years when Freud was 80 years old, Brutvan said. The love and mastery of paint, and vitality of the artist is everywhere evident in this ambitious composition.

Masterpiece of the Month continues with the following artists and works:

• June: Mary Cassatt, a quartet of works on paper, 1890-1908 — Mary Cassatt spent the bulk of her career in France, where she became the only American to exhibit with the French Impressionists. As a well-bred woman, she could not explore the scenes of modern street life favored by male Impressionists such as her close friend Edgar Degas. Instead, she focused on the domestic realm in which middle- and upper-class women like her resided, depicting the quiet, everyday events of modern life. Her small-scale pastels and prints, such as the group on display, are particularly compelling portrayals of this intimate subject matter. This work goes on display Thursday, May 30 and Ellen E. Roberts, Harold and Anne Berkley Smith curator of American art, will discuss the work at 6:30 p.m. that day.

• July: Dorothea Lange’ Migrant Mother, 1936 — Very few images attain the iconic status of Dorothea Lange’s Migrant Mother. Taken in a desolate encampment of migrant pea-pickers, Lange’s image of a mother with her three children embodies the uncertainty, pathos and humanity that would define it as the embodiment of the Great Depression. Tim B. Wride, William and Sarah Ross Soter curator of photography, discusses this work at 6:30 p.m. on Thursday, July 11.

• August: Salvador Dalí’s Portrait of Marquis George de Cuevas, 1942 — Salvador Dali fled Paris with his wife, Gala, in 1940, and assumed a central role amid the society of European Surrealists that had coalesced in New York at the outbreak of World War II. His captivating depiction of the legendary Marquis George de Cuevas (1885-1961) is among his most accomplished and ambitious portraits, filled with classical allusions and surrealist symbolism. The Marquis de Cuevas was a Chilean-born ballet impresario and choreographer best known for founding the Grand Ballet du Marquis de Cuevas, also known as the International Ballet, in New York in 1944. Curatorial associate Jerry Dobrick discusses this work at 6:30 p.m. on Thursday, Aug. 1.

• September: Court portrait of Yinli, Prince Guo, 1717 — This is the earliest known portrait of Prince Guo, the last in private hands, and the first time it has been publicly exhibited. Prince Guo was the 17th son of the Kangxi Emperor (reigned 1661-1722), half-brother of the Yongzheng Emperor (reigned 1722-1735), and uncle of the Qianlong Emperor (reigned 1735-1796). Elegant and jewel-like, it captures the scholarly, introspective prince at leisure. Later portraits of the prince are treasured works at the Palace Museum in Beijing, the Nelson Atkins in Kansas City and the Freer-Sackler in Washington, D.C. Laurie Barnes, Elizabeth B. McGraw curator of Chinese art, will discuss the work at 6:30 p.m. on Thursday, Sept. 19. The museum will be closed for gallery reinstallations from Sept. 3 through Sept. 16. Prince Guo will be on view Sept. 17 through Oct. 13.

The Norton Museum of Art is a major cultural attraction in Florida, internationally known for its distinguished permanent collection featuring American art, Chinese art, contemporary art, European art and photography. The museum is located at 1451 S. Olive Ave. in West Palm Beach, and is open from 10 a.m. to 5 p.m. Tuesday, Wednesday, Friday and Saturday; 10 a.m. to 9 p.m. Thursday; and 11 a.m. to 5 p.m. Sunday. It is closed on Mondays and major holidays.

General admission is $12 for adults, $5 for students with a valid ID, and free for members and children age 12 and under. Special group rates are available. Palm Beach County residents receive free admission the first Saturday of each month with proof of residency. For additional information about the Masterpiece of the Month series, call (561) 832-5196 or visit www.norton.org.

ABOVE: Lucian Freud’s The Brigadier, a life-sized portrait of Andrew Parker Bowles.