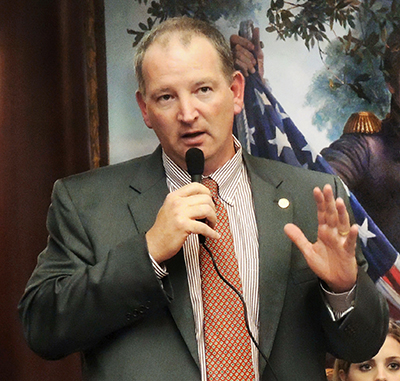 State Rep. Pat Rooney (R-District 85) gave a legislative update to the Indian Trail Improvement District Board of Supervisors last week, listing $4 million to reinforce the berm separating the J.W. Corbett Wildlife Management Area from The Acreage as the biggest benefit for the district in the new state budget.

The $4 million was about half of the more than $8 million recommended by Gov. Rick Scott. “We tried to get something for the Corbett this year, and hopefully we can get the other half next year,” Rooney said at the ITID meeting Wednesday, May 8.

The legislature approved a $74.5 billion budget. “That’s about $4.5 billion more than it was last year,” Rooney said. “The state’s economy is getting better. Our sales tax receipts were up. Tourism is better. A lot of people are spending money. That’s the primary reason why we are able to have a little bit more money this year than in the past couple of years.”

Out of the $74.5 billion, $31.1 billion is for the healthcare budget, and $20.3 billion is for education, which includes $480 million set aside for teacher merit pay raises. State employees will receive across-the-board raises between $1,000 and $1,400. State law enforcement officials will get an additional increase.

In addition to the Corbett levee financing, Palm Beach County specifically will get $4.3 million toward restoration of the Loxahatchee River and $1 million for Jupiter Carlin Park Beach restoration. Funding of $70 million was approved for Everglades restoration.

The legislature approved an elections bill that will address early voting issues that arose in the last election.

The legislature also increased the age for foster care emancipation from 18 to 21. “Some of these kids just aren’t ready to be out on their own,” Rooney said, explaining that some want to go to college and some are just not ready to join the workforce at 18. “The testimony that we got was that if you could make it 21, that would help them get to a stage in life that they would be better able to handle some of those big decisions.”

The legislature also approved Florida’s first texting-while-driving ban, making it a secondary offense. “If you’re stopped for something else and caught texting while driving, you can be cited for that,” Rooney said. “The last-minute amendment that was put in there does not allow law enforcement to use your phone records in terms of the texting unless there was a crash involving bodily injury or death. It’s a starting point. It’s not really where we want it to be with texting and driving, but it’s like when we started doing things with seat belts. I think this will evolve as it goes along.”

The legislature also approved the Cancer Treatment Fairness Act, which was strongly advocated by State Sen. Majority Leader Lizbeth Benacquisto (R-District 30), that will mandate that insurance companies have to pay for oral cancer treatment in the same manner that they pay for intravenous treatment.

“With technology and advances in science, a lot of oral medications do just as good a job as the intravenous, but it was not mandated that the insurance companies pay for it,” Rooney said. “If the governor signs this, it will be.”

Rooney was able to get three of his six bills passed. “I was able to get three of the six in front of the governor,” he said. “He has already signed one of them. That was the funeral buffer zone. This basically provides a 500-foot buffer around a funeral or memorial service to protect free speech but at the same time give those people mourning the death of a loved one some comfort.”

The law was prompted by the controversial Westboro Baptist Church in Kansas and its penchant to protest funerals of military members and other high-profile casualties.

“What we came up with was, based on some lower court rulings, is a buffer zone where the free speech can still be heard, but at the same time there is a zone there that they’re not right on top of everybody yelling and screaming,” Rooney said. “The governor signed that, and it’s going to be going into law July 1.”

He also was able to get a Disposition of Human Remains bill passed. “Right now there is an industry, believe it or not, in Florida where unclaimed or indigent bodies or body parts are being sold,” Rooney said. “It’s almost like an underground industry right now. It’s unregulated, so we got involved in this and set parameters on what you can and can’t sell of unclaimed bodies.”

Another approved Rooney bill benefits deaf and hard-of-hearing students who were previously lumped in school with other special-needs children. “The bill that I was able to pass basically puts in place a plan so that the kids are differentiated a little bit so they get more and better resources to deal with their hard-of-hearing or deafness issues,” he said.
ABOVE: Stat Rep. Pat Rooney (R-District 85) speaking earlier this year at a hearing in Tallahassee. Photo by Mark Foley