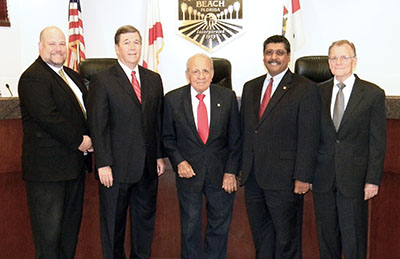 Vice Mayor Jeff Hmara said he thought village staff does an excellent job maintaining the community and delivering services. “Much of this, of course, is due to Mr. Liggins’ management and leadership skills,” he said.

Hmara pointed out that managing the village is complex, often balancing many competing factors. On a scale of 1 to 5, Hmara gave Liggins between a 3 and 4.

He rated Liggins excellent in the area of employee relations, financial management and long-range planning. In communications with council members, village intergovernmental image and completion of projects, Hmara rated him good.

“The opening of Commons Park was delayed, but opened with a great three-day event and is still growing in value every day,” he said.

“Also under Mr. Liggins’ management, staff has developed and executed an annual budget balanced without raising the millage rate, with a five-year, long-range financial plan as a backdrop,” he added. “Furthermore, the village is respected through the county, and I’ve seen it in many meetings. He has an excellent reputation for balanced development, with Aldi and projects like that being planned and executed in a way that does not degrade our citizens’ quality of life.”

Hmara said one of Liggins’ major strengths is his willingness to address areas where he needs to improve.

“Specifically, I think some improvement is needed in the area of project management, especially of our capital projects,” Hmara said. “I believe that we all would benefit from regular progress reviews on all ongoing projects, and I believe we would all benefit from an objective after-action review of the Commons Park project and the Royal Palm Beach Blvd. roadway project to identify lessons learned.”

Councilman Richard Valuntas said Liggins is doing a great job. “I am happy that he’s our manager,” Valuntas said. “He really gives 100 percent to the residents of the community, and I appreciate his effort.”

Valuntas said he didn’t know whether it was fair to fault Liggins concerning the delays at Commons Park and Royal Palm Beach Blvd., but that was the issue that drew the most resident complaints.

“I’m not an engineer, I’m not used to the contracting world, but everything seems to be a battle and things seem to get drawn out,” he said.

Valuntas said he had heard more complaints about Royal Palm Beach Blvd. than Commons Park. “I understand it was a contractor problem, but I never want to see that again,” he said.

“From that time to now, I view Ray as growing exponentially in his abilities and results,” Pinto said. “It is a difficult job, and it is a challenge to keep a staff motivated. We talk philosophically about attracting the best and the brightest. When you get the brightest on board, you want to retain them and you want to keep them motivated.”

Pinto pointed out that when Liggins became manager, he promoted someone from within staff to follow him who was relatively new to the village engineer’s responsibilities.

“I think the challenge that Ray had was to not step out of his role as village manager and go back into village engineering and take over projects,” he said. “I think he tried to give his staff the leeway to manage through the challenges that they were having. Sometimes when you do that, those challenges bubble over and become more problematic for the elected officials and some of our citizens.”

Pinto characterized Commons Park as the biggest project the village has ever undertaken. “I just want to put that in context because we did have some bumps in the road, and we had some bumps with the project up there on Royal Palm Beach Blvd., but at the end of the day, I’m really happy that we have Ray here with us, and I hope he will continue to stay with us for a very long time,” Pinto said.

Councilman David Swift said he used to criticize Liggins because as an engineer he tended to see things in black and white.

“I don’t see that coming from him anymore,” Swift said. “I see him navigating in the gray… I think he has really come a long way in doing that, and I appreciate that, and I really see that he has stepped back and looked at that bigger picture. That’s the biggest improvement that I have seen.”

Swift said Liggins has done a good job helping to project a good image for the community. “He’s out there trying to represent the village in a good way,” he said.

Swift also gave Liggins good marks on long-range strategic planning. “That was an excellent effort, even though we had to drag some of our council members, including myself, through this process,” he said.

As for the project delays, Swift said there were good reasons for them. “Not that we want them, but we’re dealing with some difficult issues,” he said. “I think everybody should listen to those kinds of things and look at how we can all work together.”

Mayor Matty Mattioli said that he and Liggins spend a lot of time together and they don’t always agree, but that the overall result is positive.

“You solve problems; you don’t make problems,” Mattioli said. “That is the biggest improvement I saw in you the past year. I think you are probably the best engineer we’ve ever had. I don’t know if you ever dreamed you were going to become a village manager, but I would say [former Village Manager] David Farber, rest his soul, broke you in and you got a feeling of it, then you made your own way.”