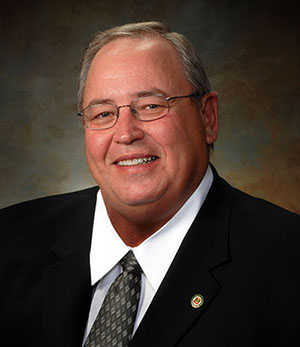 Members of the Wellington Village Council tabled a discussion Tuesday on whether to fire Village Manager Paul Schofield (shown above).

Discussion of the issue was a last-minute addition to the agenda Monday by Councilman Matt Willhite. Though he had support from Councilman John Greene, Mayor Bob Margolis suggested that the item be tabled and a management consultant be brought in to evaluate the issue.

Willhite said he thought the current management of Wellington was not working.

“I talked to [Schofield] a week ago and told him I felt we were coming to a point where we couldn’t work together for the benefit and betterment of this village,” Willhite said. “I don’t see a fix in the future, so I asked that this be put on the agenda.”

Schofield’s contract was extended in 2010 for six years through Feb. 14, 2017. If he is fired without cause — without violating the contract — he is entitled to a year’s pay plus benefits as severance, which would total about $375,000.

Gerwig said she understood that Willhite was not comfortable working with Schofield but pressed him for specific reasons.

“That’s a pretty vague description,” she said. “I need specifics of what actually happened that makes you think he is not able to function in this job anymore.”

But Willhite wouldn’t give a specific reason.

“If you want specifics, it’s on you,” he said. “I’m not going to sit here, put more blood in the water… and make things worse. It’s not fair to him.”

Gerwig said she thought now was the time to have that conversation.

“You’re dismissing someone who has worked for the village for years,” she said. “I think we deserve to know why.”

But Coates said he thought it was a personal vendetta.

“You’re not going to get a reason,” he said. “When I asked for specifics regarding Mr. Willhite’s decision to get rid of [former Village Attorney Jeff Kurtz], I got no explanation. The only reason he isn’t here today is because Mr. Willhite doesn’t like him.”

Willhite said it was not an issue of whether he liked Schofield.

“I never said I didn’t like him,” he said. “We don’t have to like each other to work together. But we have to have some kind of comfort in working together.”

Coates said that firing Schofield would be doing the public a disservice.

“He led us through the economic decline,” Coates said. “He helped cut our budget from $127 million to $70 million without cutting services. He led this village when we were named in the top 100 places to live. And through all this, he kept the tax rate low. For his masterful stewardship of this village, you’re going to fire him because one council member has problems working with him?”

Coates said he hadn’t heard any good reason why Schofield should be fired.

“I think we merit an explanation of what he has done,” Coates said. “If you take that step [to fire him], you at least owe the people of Wellington a bona-fide reason what he has done wrong to merit his dismissal. You’ve neglected to [give a reason], and without it, I think it boils down to personal animosity issues.”

Greene said he respected Schofield for his work in Wellington but felt it was time to part ways.

“No matter what happens, I thank him for his service,” he said. “But I think we are in troubled waters… It’s time for a change.”

Margolis said he thought there was a lack of communication contributing to the issues in Wellington.

He noted that it was hard to measure a village manager’s performance in a quantitative manner.

“There are no performance review standards,” he said. “You really just have to give us a balanced budget. I don’t know if I’m ready to [make a decision] tonight.”

Instead, he requested that council members allow Wellington to hire a management consultant he has worked with in the private sector who would come in, possibly speak to employees and evaluate Schofield.

“I’d like to give us the opportunity to try this out before I make a decision that I’ve never had to make before,” Margolis said.

During public comment, speakers were overwhelmingly in support of Schofield.

“Wellington is crying out for some healing, some stability, some leadership,” he said. “Paul Schofield and Bob Basehart, in my judgment, are the two best land-use experts in Palm Beach County, bar none.”

He noted that Schofield played a key part in helping Wellington meet federal environmental standards for water quality, saving the equestrian industry in the village.

“I thought that would wipe equestrian off the map in Wellington,” Adams said. “But Paul Schofield and [others] got together, and I really think they did the impossible. I don’t know how you put a price tag on that.”

“[Schofield] has done a fine job as far as I am concerned,” he said. “If you have a problem, go to Paul. Tell him what your problem is.”

Resident Morley Alperstein said he thought the issue was personal.

“This seems to be about a ‘gotcha’ instead of finding solutions,” he said. “Paul Schofield is the smartest man in this room. There is not a question you can ask that man that he doesn’t have the answer to.”

Mike Nelson said that he’d probably fought more with Schofield than anyone else in Wellington. “But there’s never been a better village manager than him,” he said.

Coates said he was in favor of bringing in an independent view. “I support this approach,” he said, making a motion to table the issue.

Willhite said he supported Margolis’ plan but felt it was something Schofield should have initiated.

“He should have done something like this six months ago when he knew the council was having issues,” Willhite said. “I think it’s a great effort to try and bring this council back together.”

He seconded the motion, which passed unanimously.