Palm Beach County is a nucleus for baseball in summer. More than 400 teams with 6,000 athletes will compete in 11 baseball tournaments on national, regional or state levels. Players, coaches and others will occupy an estimated 6,300 hotel rooms and generate more than $2.4 million of economic impact for the community.

Palm Beach County has an advantage when it comes to hosting baseball tournaments because of its outstanding facilities, tropical climate and a strong resume of baseball events. Roger Dean Stadium in Jupiter is home to the Miami Marlins and the World Series Champion St. Louis Cardinals during spring training season. It consists of a 7,000-seat stadium and 12 ancillary fields, which enables it to successfully host the nation’s largest tournaments.

The county is also home to the Santaluces Athletic Complex, the former spring training facility for the Montreal Expos. Located in Lantana, it maintains a quad of fields suitable for Major League Baseball play.

This summer, those facilities will be home to the USA Baseball National Team Championships, scheduled for June 19-26. The Palm Beach County Sports Commission has partnered with USA Baseball to host this baseball event for 14 and under and 17 and under age groups. USA Baseball uses this tournament to recruit and select players to compete on its national team. The championships include more than 70 teams and 1,100 athletes, competing in 264 games. The event is expected to generate more than 3,500 room nights and approximately $1.2 million in economic impact.

The Sports Commission also partnered with Team One Baseball to bring four of its eight Under Armour Team One National Tournaments to the county. Roger Dean hosted the Memorial Day Classic May 24-27. To come are the Southeast Regional on June 7-11, the Firecracker Classic on July 1-5 and the September Classic from Sept. 20-22. Three of the national events attract high-level 18 and under and 16 and under travel teams from across the country. The September tournament is a 14 and under and 16 and under tournament featuring teams from across the United States. These tournaments will attract 140 local and traveling teams, creating a projected 1,400 room nights and $780,000 of economic impact for Palm Beach County.

Pro-Day Baseball will conduct its inaugural national showcase in Palm Beach County at Roger Dean. This event will attract 100 elite high school baseball players from across the U.S. The players will receive exposure from the college coaches and professional scouts who attend to help them get a college scholarship or get drafted professionally. Top players from the regional showcases are invited to the national or world showcases.

Through a partnership with the Sports Commission and the Palm Beach Police Athletic League, the Perfect Game Florida Scout League will host its regional tournament July 24-29 at the Santaluces Athletic Complex, Manzo Field in Lake Worth and Palm Beach Central High School. This 18 and under event is one of six Perfect Game Florida Scout League tournaments taking place in 2013. The event will attract 40 teams and 600 athletes from across the state. Proceeds benefit the Palm Beach County Police Athletic League. 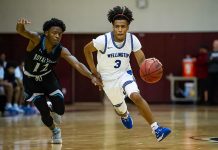 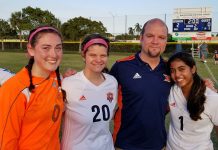 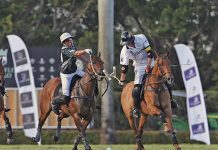 C.V. Whitney Cup Concludes This Weekend At IPC In Wellington