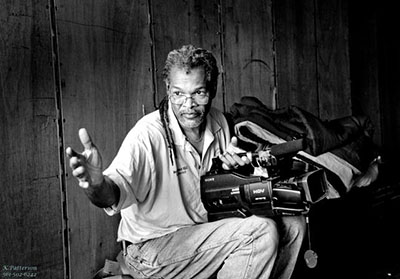 Starring Nicely “TaxMan” Jean of Boynton Beach, the sci-fi film is set in a post-apocalyptic future after the Asian Powers dropped weapons of mass destruction on the world. As the war nearly destroyed everything, people are living like they did in the past. Some, including the corporal (Jean), still maintain their military outfits, even though there are no armies or countries.

In 2057, a military officer, played by Annya Bright, has kidnapped the president and taken her back to the island to find the secret to her super soldier project in order to control the balance of power. Private Kelly (Sherrah Hill), who has strong feelings for the corporal, returns with him to the island to rescue the president. There, the corporal runs into a female friend who he hasn’t seen in years. How will the balance of power be maintained amidst the chaos? Find out at the Boynton Cinema premiere.

This new film was entirely filmed in Palm Beach County by Chocolate Star Entertainment. Davis currently airs his TV show Gary Davis Presents on the South Florida CW network, and also works with talent including cast and crew that live in South Florida. The producer invites all moviegoers to be part of the summer premiere. Admission costs $10 and space is limited.

ABOVE: Director Gary Davis will premiere his film in Boynton Beach.