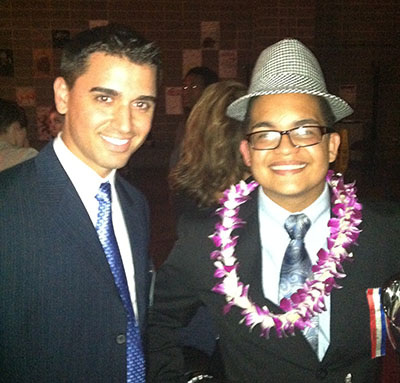 A recent Royal Palm Beach High School graduate was named the national champion in dramatic interpretation during the National Forensic League’s speech and debate championship in Birmingham, Ala., on June 20.

More than 5,000 students from across the country competed in the four-day event, and Anthony Nadeau from Royal Palm Beach took top honors in his category.

Nadeau, 17, didn’t think he would win. But being the best of the best in the nation is “pretty awesome.”

His coach, Eric Jeraci, director of speech and debate at RPBHS for the past three years, was also thrilled with Nadeau’s performance. “He’s our first champion at Royal Palm Beach,” Jeraci said.

Dramatic interpretation is basically competitive acting. Nadeau had to give a 10-minute monologue in character. He selected Lady Chablis from the book, Midnight in the Garden of Good and Evil, by John Berendt, which was published in 1994 and eventually became a New York Times bestseller. Nadeau stumbled onto the book last summer at a garage sale, Jeraci said. He read it and loved it.

Students must rely only on dialogue, facial expression and gesturing to bring their characters to life. “It was emotionally draining,” Nadeau said.

But the repetition also helped him build on his performance. “You learn more about your character and stay true to character,” he said.

It was probably to his advantage that he was on the speech and debate team for all four years of high school and that he’d performed this particular interpretation and won at competitions at Harvard and Princeton universities and at the University of Florida earlier this year.

Yet Nadeau still gets nervous. “But I like telling the story, so I focus on that,” he said.

There were 3,000 in the audience for the final round, Jeraci said.

In addition to being crowned national champion, he took home about $7,000 in scholarship money, something he’ll put to good use in the fall when he enrolls at Palm Beach State College.

He plans to study at PBSC for two years and then transfer to UF.

And while he’s not sure if he’ll join the college debate team yet, he’s pretty certain he’ll become involved with performing at some level. Perhaps theater, Nadeau said.

Three students in all from RPBHS competed at this year’s national event, Jeraci said.