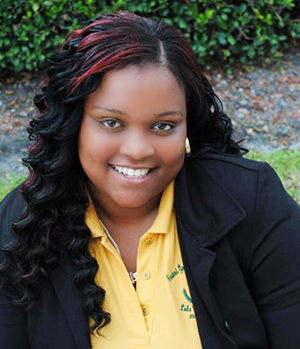 Royal Palm Beach resident Keneisha Dale, who completed her associate’s degree with honors last year and is now pursuing a bachelor’s degree at Palm Beach State College, has been selected student trustee for the 2013-14 academic year.

Dale was chosen through a competitive selection process open to all students. Twenty-nine students, the largest number ever, applied for the nonvoting student position. The five-member board of trustees created the position in 2001 as a way to get students’ perspectives on college issues and policies. Dale’s first board meeting is Aug. 14.

“It’s a very big accomplishment for me,” said Dale, 24, a former Student Government Association secretary, who is an active member and leader in several organizations on campus. “I relay messages for the students all the time, and now I’ll officially be the person doing it.”

The Jamaica native moved to the U.S. with her mother, sister and brother in 2007 and now lives in Royal Palm Beach. She had earned a technical high school diploma in cosmetology while in her home country, but at her mother’s insistence, she enrolled at Palm Beach State College to continue her education.

“She just wanted a better life for me,” said Dale, whose mother and older sister also are Palm Beach State College graduates.

Dale said she wasn’t enthusiastic about going to college initially, but after getting involved on campus, she realized the numerous opportunities available to develop as a student and a leader. “I started to become motivated,” she said.

She graduated from the Dr. Floyd F. Koch Honors College and earned her A.A. degree in spring 2012. She also was a member of the Phi Theta Kappa international honor society. She is currently pursuing a bachelor’s of applied science degree in health management. She plans to pursue a master’s degree in educational leadership after graduating next year.

Dale is the current president of the Health and Fitness Club and is a member of and has held leadership roles in the Student Government Association (secretary, 2011-12, and senator 2010-11), Black Student Union (historian, 2010-11), Christian Fellowship Club (historian, 2009-10), Gay-Straight Alliance and Phi Beta Lambda business club. She also has served on several college committees. Dale juggles her school work and college activities while working two part-time jobs, one on campus in the Student Life office and another as a home health aide.

Selection committee members attributed the increase in applicants to social media and the college’s ability to send mass text messages to students. Candidates must submit an essay and two letters of recommendation and interview with a committee of students, faculty, staff and a trustee.

“Social media made a big difference,” said Leonard Bruton, associate dean of academic affairs at the Boca Raton campus, who chaired the Student Trustee Selection Committee. “We received applications from a general cross section of the overall student population. We went from normally five or six interviews to two full days of interviews.”