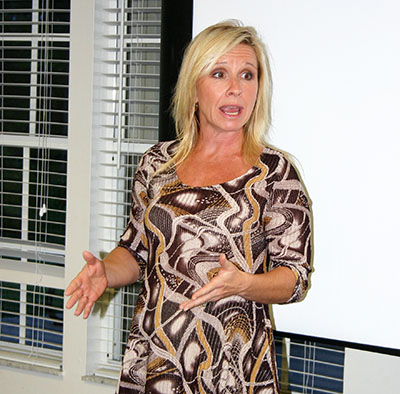 Palm Beach County Film & Television Commission Director of Operations Michelle Hillery told members of the Loxahatchee Groves Landowners’ Association last week that her organization always is seeking new, unique locations and actors for productions — and that Loxahatchee Groves seems to be a ripe spot for both.

Hillery said her staff was thrilled that she’d been invited to make a presentation to the LGLA. “We would love to better incorporate Loxahatchee into what we do,” she said.

The film commission’s mission is to make potential filmmakers’ jobs as easy as possible by cutting through red tape. “We have what is called a one-stop permitting process with 34 out of the 38 municipalities in Palm Beach County, in which we facilitate the permitting process when production companies come in,” she said.

The county’s film and television promoting body is among dozens of film commissions in the state. “Some of them are a one-person liaison,” Hillery said. “We would be considered a full-service commission. We have a staff of five, and we have probably one of the better budgets. Many of the commissions are underfunded for what they do with the business they bring in.”

“We’re considered the baby of the agencies,” she said. “We’re just over a half-million dollars on an annual basis. We market and we service the film and television industry.”

The commission markets the county as a destination for film, television, still photography and digital production. “We also serve the area by providing the permits,” Hillery said, explaining that they work as the liaison between production companies and municipalities. “We gather all the information and logistics in order for the municipality to make a decision whether or not they wish to have this particular production project take place in their community.”

However, one-stop permitting does not eliminate municipal control.

“You would have a say whether or not a production would come in and, depending on what it is that they are going to be doing and how long they were going to be here, what the economic impact of that project was going to be,” Hillery said.

However, the process is usually done by staff, bypassing council meetings. “Production is usually very quick,” she said. “They need to get answers fairly soon.”

The commission also photographs locations and has an online database that production companies can search for filming locations.

“Barns, equestrian land, unique homes, gardens — these are all sought-after locations,” Hillery said. “We don’t know every nook and cranny in Palm Beach County. We can’t possibly, so we rely on our community to let us know what types of unique or different locations you may have that we may be able to incorporate in that database.”

Locations are a large part of how the commission markets the county to production companies throughout the world. “They’re staying in our hotels, they’re hiring our local crews, they’re spending money, and that’s what this business is all about,” Hillery said.

The one-stop permitting process is a free service because the return is great for the county. “The industry is over $100 million on an annual basis here in Palm Beach County,” she said. “We fill roughly 12,000 room nights here in the county.”

While the sports commission generates far more room nights and revenue for the county, the return from film and television is still impressive, Hillery said.

“For every dollar that Palm Beach County spends on growing and nurturing the film and television industry, there’s a $224 return on that investment, so it’s pretty substantial,” she said. “We thoroughly enjoy what we do in working with both production companies and our community.”

The commission is also involved in education.

“We feel that part of our marketing strategy in growing the film and television industry here in Palm Beach County is also about the education and nurturing our own,” Hillery said, although she noted that the county does lose film and television students to more widely recognized cities for the industry such as Los Angeles and New York. “What many of you don’t know is we have more than 50 production companies here in Palm Beach County.”

She noted that part of the commission’s responsibility is to inform guidance counselors, principals and teachers what the film and television industry looks like in the county and the state.

“We advocate for the entire state with the other film commissions, but our jurisdiction is here in Palm Beach County, and we’ve got a beautiful area to promote,” Hillery said.

The commission also produces the largest statewide film competition for high school and college students. “We give away more than $10,000 in scholarships and awards in several categories. We receive close to 300 entries each year, and we have judges all over the country who view the submissions and pick the top films within those categories, and then we put on what we consider a mini-Academy Awards ceremony.”

The commission had nearly 700 attend its last Student Showcase of Films, hosted for the last three years at the Lynn University’s Wold Performing Arts Center in Boca Raton.

Hillery said feature films get a lot of media attention, and that they recently had a red-carpet reception for Parker, starring Jennifer Lopez and Jason Statham, which was filmed largely in the Town of Palm Beach.

“We actually did a big red-carpet premiere with the director Taylor Hackford before it came out in the theaters,” she said. “It was a thank-you to our community because it really is a community effort. If we didn’t have the support of our municipalities, we wouldn’t be able to do what we do.”

Dr. Bill Louda suggested that Hillery make a presentation to the Loxahatchee Groves Town Council to see if it is interested in joining the one-stop permitting process.

“You mentioned unique sites. I can think of one right next door to me, the Rare Species Conservatory Foundation, where they raise endangered African antelope, bongos, the largest of the antelope, and if anybody wants to film exotic birds, boy have we got them,” Louda said.

Loxahatchee Groves is one of the four county municipalities that the film commission does not have a relationship with. But she added that private property owners do not have to go through the permitting process, although they might be subject to certain ordinances.

“If you’d like to upload some photographs of your home or business, there is a page on our web site where you can upload some images and give some basic information,” Hillery said. “I see some potential actors in this room.”