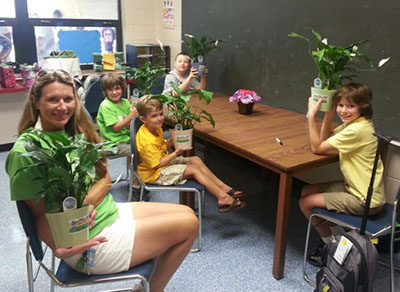 Students and teachers at H.L. Johnson Elementary School in Royal Palm Beach can breathe easier, literally, at the start of this school year, thanks to a green initiative organized by the school’s Team Green coordinator and its Parent-Teacher Organization president.

Thanks to a donation from Miami’s Costa Farms, 80 peace lily (spathiphyllum) plants found their way to each of the 65 classrooms in the school, plus additional plants for the principal’s and assistant principal’s offices and the library, said Darcy Murray, the school’s Team Green coordinator.

The peace lily is one of the most efficient houseplants for filtering indoor pollutants from the air, noted Murray, a Loxahatchee Groves resident and mother of two. It topped NASA’s list for removing all three of the most common volatile organic compounds: formaldehyde, benzene and trichloroethylene. It can also combat toluene and xylene.

“The PTO president and I researched the best type of plant,” Murray said.

Another advantage was the plant’s low maintenance, explained PTO President Helen-Marie Harward. “It’s easy upkeep, once-a-week watering and it can survive in low light,” she said, adding that the plants can also survive in windowless classrooms.

Next, Murray needed to figure out how to get the plants into classrooms for little or no cost. When the chain stores couldn’t help, she went straight to the plant grower, Costa Farms.

They were eager to help, Murray said, but someone would have to drive down to pick up the plants and someone would need to photograph the plants in the classrooms and send them to Costa Farms.

“This was a win-win for both sides. It reinforces our message of the health benefits of plants for kids,” said Jonathan Palone, a marketing manager for Costa Farms.

Costa Farms takes donation requests on a case-by-case basis, depending on the need, time of year and inventory supply, Palone said. For example, the farm donated plants to Florida International University for Earth Day.

With the donation secured, Murray turned to Harward and her husband for help getting the plants to the school.

Harward’s husband works for Schumacher Automotive Group, a longtime H.L. Johnson business partner. They were able to secure a van and a Schumacher employee to drive down to the Homestead area and pick up the plants.

Forming business partnerships is very important to the school, and first-year PTO president Harward is busy cultivating as many as she can, including two new agreements with Rita’s Italian Ice and the Flanigan’s restaurant chain. In exchange, the businesses can expect to be mentioned in the school’s monthly newsletter, which circulates to around 1,000 families, she said.

Schumacher has been particularly supportive, making cash donations and also loaning the school some of its convertibles for a fundraiser, Harward said.

She was grateful for the support from Costa Farms, which totaled about $800 in value based on the plants costing $10 each. “They really went above and beyond the call of duty,” Harward said.

Students decorated the pots with stickers that read, “Come and Grow With PTO and Breathe Clean with Team Green,” and hand-delivered them to each teacher, said Murray, who photographed the students with their plants to send off to Costa Farms.

“This is going to be an exceptionally green year as the PTO and Team Green have joined forces and are working hand-in-hand to make H.L. Johnson Elementary greener,” Murray said.

Other green initiatives underway at the school include a “no-idling” zone in the car pickup area to reduce the amount of emissions that children are exposed to while waiting to be picked up, and a campaign to sterilize the cafeteria with Sterile Doctor, an Earth-friendly spray that kills bacteria for years. The PTO is currently fundraising for that project, figuring it needs to raise about $5,000 to make it a reality. A fundraising carnival open to the public and slated for Oct. 4 at the school with food vendors, crafts, demonstrations and games should help with that.

In addition, a mobile application called PTOtogo was created over the summer to help spread the word about how other schools can conduct green initiatives and fundraisers, Harward said. It will be available soon and is downloadable on Apple or Android smart phones.

“We want to set the bar high for other schools that aren’t as green,” Harward said.

H.L. Johnson was awarded a “Green School of Excellence” award for the first time last year by the Palm Beach County School District. The Green Schools Initiative recognizes schools that have made efforts to create a culture of sustainability within their school environments. Schools are given points in six categories. A Program of Excellence school has scored between 80 and 100 points and shows the highest level of commitment to sustainability.