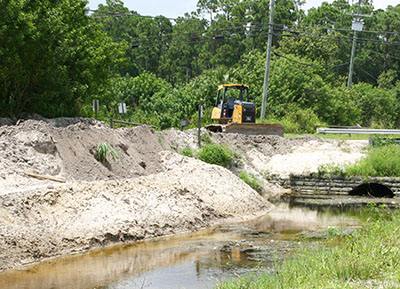 Canal work to get the Loxahatchee Groves Water Control District drainage system up to specifications is now underway, beginning with the A Road Canal.

The work is beginning this budget year, but the district plans to purchase a long-reach backhoe next year so the district can perform its own maintenance without having to hire a contractor to do the work, according to LGWCD Administrator Stephen Yohe, who was hired in February.

“Prior to Tropical Storm Isaac, previous storms eroded the canal banks, the A Road Canal, as well as a number of other places,” Yohe told the Town-Crier on Monday.

Yohe advised supervisors during June budget discussions that the canals needed work, which would probably involve an assessment increase that would be used to acquire an extended-reach backhoe to dredge canals.

The project will start with A Road and other areas that have accumulated several feet of silt, which is impeding drainage.

Yohe noted that LGWCD staff recently cleaned a clogged culvert on A Road and found that other canals have not been dredged and maintained the way they should. The problem could negatively affect a requested review of federal flood plain maps that could require residents to obtain flood insurance.

“We’ve applied to [the Federal Emergency Management Agency] for reimbursement for some of the work,” Yohe said. “We have cross sections from June 1995 and September 2009, and this was prior to Isaac occurring… Basically, the side slopes have fallen into the bottom of the canal.”

Up to 2.5 feet of fill has accumulated in the bottom of the canal that shouldn’t be there, he said.

“What we’ve been working on is to repair our maintenance berm, which had also slid into the canal,” Yohe said. “We had to rebuild the maintenance berm on the west side of the canal so that we can now go in with a backhoe and dig the canal out to its design section.”

The cost of the work being done now was included in the current budget, he said.

Two contractors are doing the work to build up the berm along the A Road Canal.

“We had one start at the north end at Okeechobee, and one started at the south end at the Collecting Canal,” Yohe said. “We pretty much finished that last week. Now we’re going to take some proposals from the contractors to actually put a backhoe out there and excavate the canal to its design section.”

The bottom of the canal should be 10 feet wide with a 1.5-foot slope on the sides. “We’re basically trying to put the canal back to what it was designed and permitted for, which is what is necessary to provide adequate drainage for the residents,” Yohe said.

The purchase of a backhoe with a 40-foot reach has been included in the preliminary 2014 budget.

“The preliminary budget was approved at our July 8 board meeting, but final approval won’t be until September,” Yohe said. “If it is approved, there are monies included in that for the district to lease/purchase the backhoe.”

He explained that a lease/purchase is typically granted to special districts to purchase equipment over time, as opposed to obtaining a bank loan.

Meanwhile, canal work will move on to other canals in the district on a rotated basis.

“All the canals need maintenance,” Yohe said. “When we finish this particular section, we’ll go to another canal. It’s typically done over a 10-year period, and you clean out your canal at one end and finish at the other, and you start over again. It’s a process that is obviously dependent on weather conditions, whether we have other hurricanes or tropical storms that cause erosion.”

At the July 8 budget meeting, Supervisor John Ryan said the emphasis in the budget was to improve drainage by cleaning out canals and culverts under Okeechobee and removing sand berms, not only to get water out, but to mitigate new FEMA flood map information that puts most of the town on a flood plain, which could lead to higher insurance costs.

Yohe told the Town-Crier that the process will assure that the district’s system is excavated to its proper design.

The assessment increase, if finalized, would raise the district’s assessment to between $107 and $113 per acre, depending on the property. The assessment is more for those along unpaved roads because of grading and dust watering.

ABOVE: Work is underway to bring the A Road Canal up to its drainage specifications.