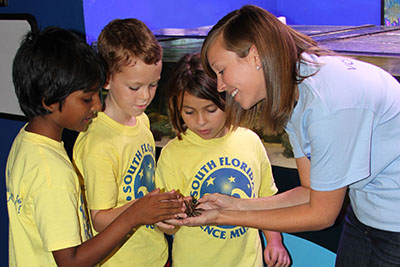 On Thursday, Aug. 8, visitors will have an opportunity to speak with special guest Hannah Medd, a local marine biologist working to apply scientific research to the shark conservation message. To learn more about why sharks are so vital to the marine ecosystem, be sure to stop in and visit her at “Professor Clark the Science Shark’s” booth throughout the day. Additional opportunities for structured labs and facts will occur daily from 11 a.m. to 2 p.m.

“We love the Discovery Channel’s Shark Week,” Science Center CEO Lew Crampton said. “It’s another opportunity for us to be the community resource for continued hands-on, minds-on informal science education. Our guests and out-of-town visitors can come in to learn more about what they saw on TV, right here in our backyard, which allows us to further our new mission of ‘opening every mind to science.’”

With the new addition of a 3,000-square-foot aquarium, the largest fresh and saltwater aquarium between Miami and Orlando, the Science Center is perfectly positioned for under-the-sea education. The aquarium features more than 90 different varieties of fish, including sharks.

Currently home to a nurse shark and a baby marblehead shark, the Science Center has plans to add two more shark species in the very near future. Stingrays, close cousins of the sharks, also have a home at the newly expanded Science Center, and will be on display in the ever popular touch tank.

And if modern day sharks aren’t enough to thrill guests, the Science Center is currently hosting “Savage Ancient Seas: Dinosaurs of the Deep” in the newly expanded exhibit hall.

The traveling exhibit takes visitors on a tour of the late Cretaceous period, over 70 million years ago. The exhibit is filled with huge carnivorous marine reptiles, with double-hinged jaws and teeth, gigantic flesh-eating fish big enough to swallow an adult human whole, flying reptiles with three-foot skulls and the biggest sea turtles to have ever lived. Also included in the display is Megalodon, an extinct species of shark, also known as “big tooth.” The waters of the earth during that time were teeming with beasts just as ferocious as their better known counterparts on land.

The facility is located at 4801 Dreher Trail North, West Palm Beach and is open Monday through Friday from 10 a.m. to 5 p.m., and on Saturday and Sunday from 10 a.m. to 6 p.m. General admission is $13.50 for adults, $10 for children three and up and $12 for seniors. Members and children under three are free. Planetarium shows and miniature golf are not included in general admission.

ABOVE: There’s plenty to do at the South Florida Science Center & Aquarium during Shark Week.