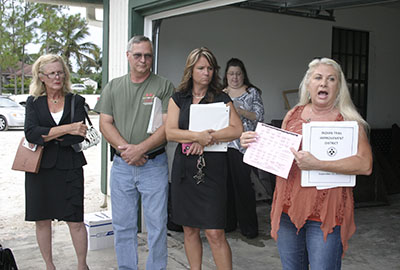 The long-delayed Hamlin House project at Nicole Hornstein Equestrian Park in The Acreage got a major push forward on Wednesday when the Indian Trail Improvement District Board of Supervisors directed work to move forward with a contractor rather than as a high school construction academy project as it had been in the past.

The board met Wednesday at Hamlin House to give approximately 40 residents attending an idea of what the 5-acre horse ranch west of the park looked like.

The ranch was purchased by the district several years ago for $269,000. Actual development of the property got bogged down with permitting issues.

Contractor Bill Featherstone said the project had started in early 2011, and the Seminole Ridge High School Construction Academy came in for a few days in the summer of 2012 and did some demolition work and then moved on to other projects.

“I know there have been issues with Palm Beach County with this for permitting, residential ownership to public ownership and improvements that have to be made. For example, it has to be handicapped-accessible,” Featherstone said. “We’re behind, it’s not done and we’re here to do it.”

ITID Supervisor Michelle Damone said when the house was purchased, it was a good deal, explaining that at the height of the housing market, it was listed at $775,000. After the crash, ITID got it for $269,000. At the time, the district did not have money to renovate the ranch, but staff came in and cleaned it up. In 2011, the district invested some money in the project to make it a public meeting house for clubs and organizations.

ITID Vice President Carol Jacobs had asked that the meeting be held at the site to give people an idea what it looks like. Jacobs said comment cards were available for people to provide input on what they would like the project to have.

“This house can be used for a lot of things, and it’s just sitting here,” Jacobs said, adding that the district can make money hiring it out for events such as weddings. “I want to push forward. This has been sitting here for years, and the community can use it.”

Damone pointed out that lights that had been advertised were not for the arena, but for the house’s parking lot, which is required by the county. “It’s something that we have to do when we change the zoning from being residential to being a public facility,” she said. “We have to light the parking lot to be sure it’s secure when the sun goes down.”

Featherstone said the parking lot lights will be only 15 feet high, and they will be hooded.

ITID Supervisor Ralph Bair said he had come out to inspect the property with Parks & Recreation Director Tim Wojnar after the school had left the project. “We knew we were running behind schedule,” Bair said.

Damone said letting the school participate was a good idea at the time, but it got tied up with other projects.

Bair said he became discouraged when he saw how little had been done. “That’s when we decided to get together and get this thing finished,” Bair said.

Featherstone said progress by the high school construction academy had become tied up in permitting after they had completed the demolition work. “The school probably saved you guys about $5,000,” he said. “I don’t know if Indian Trail actually suffered for it, because really the process has been held up ever since that moment because of Palm Beach County permitting. We’re past that point now.”

Featherstone said the master permit is out, the plumbing and mechanical rough inspections have passed, and the electrical inspection will probably be passed by next Tuesday or Wednesday.

“If the weather permits, we’ll be forming concrete and pouring hopefully,” Featherstone said. “The longest lead time is going to be the installation of the lights because of the lead time with fixtures and poles. The casting companies [for the concrete light pole footers] haven’t been casting lately because the weather does not permit them to do it.”

Former ITID Supervisor Mike Erickson said the project is a positive step for the community, and although it is not a full community center — such as the Acreage Community Park project dropped recently — Hamlin House can be a positive alternative.

“It’s time to get it done,” Erickson said. “The intent was always to make this a meeting room.”

He added that the 5-acre site could be an ideal venue for community events such as green markets.

“This is not going to replace the community center that was proposed, but it’s a start,” Erickson said. “We allocated the money years ago. Yes, [there were] permitting issues, but it seems like there’s momentum now. Let’s get it done. There’s no reason not to be out here having a ribbon-cutting within 60 to 90 days.”

The board agreed to add the project to the agenda for discussion at a meeting set for Wednesday, Sept. 25.

ABOVE: Attorney Ruth Clements looks on as ITID Supervisor Ralph Bair, Supervisor Michelle Damone and Vice President Carol Jacobs meet at the Hamlin House to discuss the future of the building.