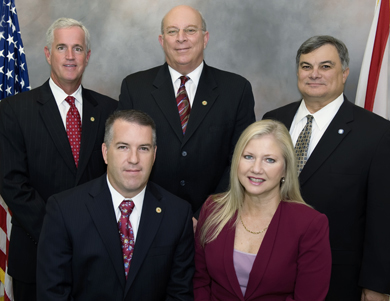 Wellington residents probably will see an uptick on their tax bills this year, but not as high as previously proposed.

Members of the Wellington Village Council gave preliminary approval Tuesday to set the tax rate at 2.47 mills during the first public hearing on the budget. The issue is up for final adoption at the council’s Sept. 24 meeting.

The rate is down from the TRIM (Truth-in-Millage) rate of 2.5 mills approved in July.

At 2.47 mills, the tax rate is unchanged from last year. However, due to increasing property values, many residents will pay slightly more, and Wellington will take in more money.

Wellington would take in about $13.5 million in property taxes at that rate, an increase of about $770,000 from last year.

Wellington also decreased its proposed budget, maintaining it the same as last year at $74.46 million, instead of raising it as proposed in July. Changes to the budget include $305,000 for additional law enforcement deputies and increasing staff to 292 employees.

The budget also shifts $1.4 million in financing for the Wellington Community Center reconstruction, which Director of Operations Jim Barnes said was to give leeway for whatever design the council chooses for the new Wellington Tennis Center.

Vice Mayor Howard Coates wanted to be sure staff tried to keep to the $5.2 million budget the council approved for the site earlier this year.

“It looks like we’re saying when you design-bid-build this, there’s more than $6 million available for this project, not $5.2 million,” he said.

But Coates said he was pleased staff was able to keep the tax rate lower.

“It’s not an insignificant act for staff to come back with the final budget and tell us it is still at 2.47 [mills],” he said. “I commend you for that. I don’t know if there are a lot of municipalities that wouldn’t have taken the bait. I think it’s a testament to [Village Manager Paul] Schofield and his financial staff.”

But Councilman John Greene said he wanted to see the rate even lower. “There are still people struggling,” he said. “It could have a significant impact.”

He asked whether it was possible to take the budget down to the “rollback rate” of 2.35 mills, which would keep Wellington’s property tax income the same as last year.

Schofield said that could be possible.

“There are ways to cut everything,” he said. “The budget I presented to you is the one I believe provides a level of service that the council and residents expect, and is fiscally responsible. We are not spending the kind of money we were six years ago.”

Coates said he believes cuts would affect Wellington’s service levels. “It seems to me that going to the rollback will result in a budget that is less than what we had last year,” he said.

He asked whether Schofield could cut the budget without affecting service.

Schofield said he did not know for sure, but noted that in the middle of last year, council members had asked him to add more staff in response to residents’ complaints.

“We added people in the building department, the customer service department and to answer phones,” he said. “Cutting the budget will take some of those people out. If I’m instructed to cut the budget, I will cut it.”

Councilwoman Anne Gerwig made a motion to approve the budget, which passed 4-1, with Greene opposed.

Wellington Parc Update — In other business, council members rescinded direction given to staff at the last meeting regarding the Wellington Parc property.

Looking to require a connection between the 16-acre site on State Road 7 south of Palomino Park, council members directed staff to require access between the two sites before building permits for Wellington Parc would be issued.

Village Attorney Laurie Cohen asked council members Tuesday to take back their direction, noting that the issue was not on the agenda that night. Further, she argued that the direction may not be necessary.

“The applicant had no notice that the item would be considered,” Cohen said. “And it gives unfair discretion to Palomino Park.”

Wellington Parc must sign an access agreement with Palomino Park to use their right-of-way. However, the two sides have been unable to come to an agreement on terms. “You still have the development orders, which impose the conditions,” Cohen said. “I don’t think this particular motion [regarding building permits] is necessary. I think it’s superfluous and was not properly noticed.”

But council members expressed frustration that the connection might not be built. The access road would allow future residents of the site to get to a traffic light at Palomino Drive and travel north on SR7.

“We’re left in a position where we have no ability to force them to connect the two and enter into a mutual easement,” Cohen said. “We’re just in a difficult position.”

Council members agreed to rescind the direction but encouraged both sides to come to an agreement to use the access.