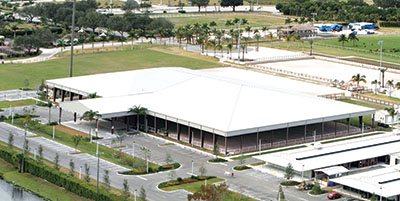 Members of Wellington’s Planning, Zoning & Adjustment Board recommended approval Wednesday of the latest plan for the controversial Equestrian Village project.

While the master plan amendment was opposed by only Board Member Paul Adams, the more controversial compatibility determination split the board 4-3.

For more than two hours, board members debated traffic and parking concerns, along with potential problems with noise and lights. The item is expected to go before the Wellington Village Council in late October or early November.

Before the board was a master plan amendment to allow access to the site from Pierson Road. A compatibility determination would also designate the site as a commercial equestrian arena, which would allow it to operate year-round as a show facility.

“We would like this property to be a permanent equestrian arena and venue for Wellington,” said Tatiana Yaques, attorney for the applicant.

Yaques noted that Wellington has already approved four other sites with the designation. “What you see here in front of you is a great evolution,” she said. “We started with what we think is a great project and made it even better.”

Wellington staff recommended approval of the applications with a number of conditions. Among them, property owners must make improvements to the canal easement along the property, provide a horse crossing at the access point on Pierson Road and follow Wellington’s manure management standards.

Equestrian Village owners also would have to provide deputies from the Palm Beach County Sheriff’s Office to direct traffic after large events, coordinate event times with the Winter Equestrian Festival to minimize traffic, and limit the hours of operation to between 7 a.m. and 10 p.m., except for one night a week, on Friday, Saturday or Sunday, when the hours of operation would be extended to 11 p.m.

“If we allow an entrance on Pierson Road, how many people will use it?” he asked. “Traffic backs up in the morning and evening significantly. I can just see all sorts of issues with horse trailers.”

Wellington’s traffic consultant Andrea Troutman said the traffic study estimated about 10 percent of all traffic to the site would come from Pierson Road.

“It’s a two-lane roadway with traffic calming measures,” she said. “People are much more likely to come from South Shore.”

But Adams noted that Pierson Road was accessible by State Road 7 and Forest Hill Blvd. “I find that hard to believe,” he said. “It’s a straight shot. People will use it.”

He was also concerned about plans for a horse park on the K-Park property on SR 7. He asked whether traffic from that project had been taken into account.

Planning & Services Development Director Tim Stillings said that because that project was not yet approved, nor built, applicants could not guess what traffic issues it would cause. “Those issues will be for the horse park to deal with,” he said.

Board Member Carol Coleman was concerned about traffic if and when the site grows.

“I’m looking at the future of this,” she said. “I’d like the site to be successful. If it is successful, it will get greater and greater amounts of visitors and spectators. It will increase the traffic.”

She said a proposed left-turn lane on Pierson Road coming from the west could cause traffic problems.

Michael Sexton, agent for the applicant, said that, if approved by the village, the site owners would build a third lane westbound on a portion of Pierson Road to allow for the turn.

“It would require some widening and some pushing into the canal,” he said. “There may be some filling of the canal, some guardrails and other items.”

Coleman said the average tractor-trailer is more than 53 feet long, making it difficult for them to navigate the tight turn at Pierson Road.

“I don’t know how these big tractor-trailers are going to come across and make that turn,” she said. “I think there’s a major issue of them entering off Pierson from the west.”

Sexton said there would be enough room for tractor-trailers to turn.

Another concern was parking on the site. Now, parking is divided between paved spots and grass, with parking in rings for overflow during major events.

Board members asked whether there would be adequate parking or whether more paved parking would be required.

Sexton said there were some areas the applicant was considering paving. “But we’d rather keep it green,” he said.

Board Member Marcia Radosevich was concerned about a number of hunter/jumper shows on the schedule. “We’re calling this a dressage facility, but that is not the case,” she said.

“A number of hunter/jumper shows will be small shows in the summertime,” he said. “They’ll hardly impact anyone. There are four days in season for Grand Prix classes. There are only 45 horses there. We’re not dealing in the same numbers at all.”

Radosevich was also concerned about the lights and noise affecting nearby neighbors.

“When this was a polo facility, it was only used a couple of times a week,” she said. “These people didn’t buy their homes next to a major horse show arena.”

Board Member Tim Shields made a motion to approve the master plan amendment, which passed 6-1 with Adams opposed.

Shields then made a motion to approve the compatibility determination, which carried 4-3 with Adams, Coleman and Radosevich opposed.

“I think we’ve made giant progress on this application, but I still have concerns about the compatibility, the traffic and safety,” Radosevich said. “I have concerns for the residents who surround this place. I think this is a good start, but with a little more work, some of these issues could be resolved, and this could be an even better application.”