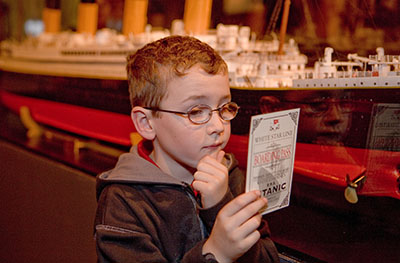 On April 15, 1912, the world’s largest ship, Titanic, sank after colliding with an iceberg, claiming more than 1,500 lives and subsequently altering the world’s confidence in modern technology.

A little more than a century later, the South Florida Science Center & Aquarium pays tribute to the tragedy, which continues to resonate through “Titanic: The Artifact Exhibition,” where nearly 100 legendary and priceless artifacts conserved from the ship’s debris field will be showcased to provide visitors with a poignant look at this iconic ship and its passengers.

The exhibit opens at the South Florida venue at 4801 Dreher Trail in West Palm Beach on Nov. 16 and runs through Titanic’s fateful 102nd anniversary, with the exhibit closing on April 20, 2014.

The exhibition was designed with a focus on the legendary RMS Titanic’s compelling human stories, as best told through authentic artifacts and extensive room re-creations. Perfume created by a man traveling to New York to sell his samples, china etched with the logo of the elite White Star Line, even personal effects such as a cigar holder, toothpaste jar and a calling card, these and many other authentic objects offer haunting, emotional connections to lives abruptly ended or forever altered.

Visitors are quickly drawn back in time to 1912 as they enter the exhibit, with each receiving a replica boarding pass of an actual passenger on board Titanic. They then begin their chronological journey through the life of Titanic, moving through the ship’s construction, to life on board, to the ill-fated sinking and amazing artifact rescue efforts.

Visitors will marvel at the recreated first-class and third-class cabins, and can press their palms against an iceberg while learning of countless stories of heroism and humanity. In the “Memorial Gallery,” guests will take their boarding pass to the memorial wall and discover whether their passenger and traveling companions survived or perished.

Over the past 15 years, more than 25 million people have seen this powerful exhibition in major museums worldwide, from Chicago to Los Angeles and Paris to London.

The South Florida Science Center & Aquarium, formerly known as the South Florida Science Museum, recently completed a $5 million expansion and renovation, and will host the Titanic exhibit in its newly expanded exhibit hall. The center features more than 50 hands-on educational exhibits, an 8,000-gallon fresh and saltwater aquarium featuring both local and exotic marine life, a digital planetarium, conservation research station, Florida exhibit hall and an interactive Everglades exhibit. All exhibits will be open during the Titanic’s special showing.

Admission to the science center during “Titanic: The Artifact Exhibition” will be $15 for adults, $11.50 for children ages 3 to 12 and $13.50 for seniors ages 62 and older. Science center members and children under 3 are free, and school-group pricing will not be affected. Planetarium shows and miniature golf are not included in general admission pricing.

ABOVE: Visitors each receiving a replica boarding pass of an actual passenger on board Titanic.