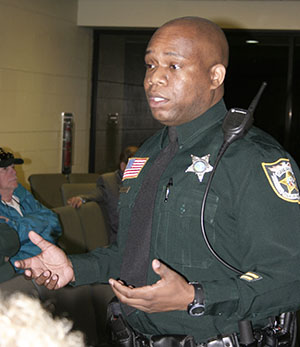 Members of the Palm Beach County Sheriff’s Office announced last week that they have cleared up issues with illegal drinking, littering and loitering at the A&G Market and Palms West Plaza shopping centers on Southern Blvd. in Loxahatchee Groves.

Speaking at the Jan. 23 meeting of the Loxahatchee Groves Landowners’ Association, PBSO District 15 Commander Lt. David Combs said he hopes the effort will be the end of ongoing problems in the area.

“We’ve had problems with some of our residents drinking a little bit too much and behaving badly,” Combs said. “We promised what we thought was the best possible solution, and do it the right way, and do it one time.”

At first, conflicting legal jurisdictions caused confusion. Combs said Palm Beach County, the PBSO and Loxahatchee Groves town legal staff had to work through the existing ordinances so that there were no conflicts.

“In a big town, this would be a little problem,” he said. “In a little town with one plaza, this is a big problem. You can’t always find ways to solve problems, but you can find ways to treat a problem and control it,” Combs said.

He then introduced Deputy Nigel Pruitt, who took the lead in the Palms West Plaza Action Plan, which involved the work of many officers, several of whom were at the meeting.

“I couldn’t be prouder of all of you, because we took a problem, and we analyzed it thoroughly, and came up with a solution that’s legal,” Combs said. “I think the business owners in the plaza are going to be thrilled.”

Pruitt said most of the issues involved substance abuse, but that there were also problems with how some tenant businesses maintained their property and conducted business.

In the process of implementing the plan, some businesses were found to be selling counterfeit merchandise and alcohol they were not authorized to sell. Some of the stores were serving food in unsanitary conditions, Pruitt said.

In analyzing the situation, the team met with business owners, patrons and members of the community to assess what the common issues were. Security vulnerabilities were at the top of the list.

“Everybody, whether they’re in their home or going into a business, wants to feel safe,” Pruitt said. “We want to ensure that everyone is safe, not only the customers, but the business owners as well.”

He recommended that business owners install security cameras and better alarm systems, and use more protective building materials. Bulletproof windows or “ballistic paneling” is not effective if the area underneath the window and the door are not secure, Pruitt said. “Drywall won’t stop a bullet, and it won’t stop a fist or a good boot,” he said.

Pruitt added that a contracted security company or dedicated deputy might be a worthwhile investment, given the wide area that a limited number of District 15 deputies have to cover.

A big problem in the plaza has been robbery of pedestrians outside the businesses, he said. “The bad guys see a victim coming,” Pruitt explained. “They look for prey. They are looking for somebody susceptible. A good number of the people victimized were targeted because they were impaired or intoxicated.”

Many of the businesses that cash checks did not require sufficient identification, he said, and littering has been a common issue throughout the area. “I’m always tripping over beer bottles,” Pruitt said. “These are your businesses, and this is your community. If you see it on the ground, pick it up.”

He recommended that owners have one of their employees go out with a garbage bag and collect litter. He also noted that the plaza was short of trash cans and that businesses with trash cans were not emptying them. Further, the trash bin in the plaza was too small and frequently overflowing, and he suggested that it be emptied more frequently.

Much of the lighting in the plaza was inoperable, which enabled much of the undesirable behavior, and Pruitt spoke to the landlord about getting the lights working.

Public indecency offenses, such as urinating in public, were also an issue. In investigating that situation, Pruitt discovered that problem can also be attributed to structural problems with the plaza — lack of cleanliness of the restrooms, lack of signage where the restrooms were and limited access. “Some of the businesses do not have public restrooms,” he said. “If you have a sign, chances are they will go to the restroom, but if it is not clean, they won’t use it.”

Beverage offenses were a prevalent issue, largely because there are four places where alcohol can be purchased. “We can’t say that it comes as a surprise that there is litter and people under the influence wandering about,” Pruitt said.

He pointed out that none of the businesses have licenses for outside consumption, except Boonies in its patio area, but that a great deal of outdoor consumption was going on.

Pruitt said strict enforcement of those regulations has prevented people from loitering around intoxicated and reduced littering. They also had food stores with tables outside remove the tables.

Substance abuse has been a problem, which is being addressed in part by an organization based in the plaza called the Billy Bob Club, a 12-step group that addresses both substance and alcohol abuse.

“It has been willing to provide the literature and resources available to our targeted audience, providing meetings in a multilingual format,” Pruitt said, adding that he has directed some of the regular loiterers to the program.

After meetings with business owners, talking to loiterers and making changes in the plaza, the PBSO began enforcement, which resulted in more than a dozen arrests for open container violations, public intoxication or indecent exposure.

The deputies also began enforcement of business violations in the plaza. They brought in the Florida Department of Business & Professional Regulation to make sure businesses were operating within the constraints of their license.

“Our intention with the inspector was to educate people and try to give them one more opportunity [to obey the law],” Pruitt said.

Since the enforcement began, he has talked to 15 random people, 13 of whom said they thought the plan had a positive effect.

Pruitt added that calls for service have gone up since the implementation of the plan, and that he thinks that is because people have increased confidence that the PBSO will respond.

“I want you to continue calling, because when you call, I will come,” he said.