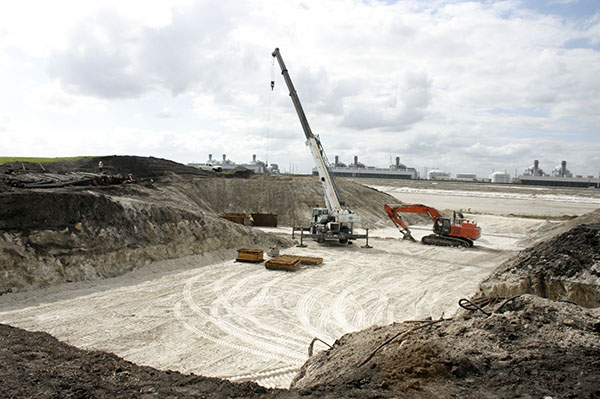 South Florida Water Management District officials led a tour recently of the nearly 1,000-acre L-8 Reservoir/Flow Equalization Basin that will store excess stormwater in a series of 50-foot-deep pits and provide a constant flow to the stormwater treatment areas to the south as part of the Everglades restoration project.

Project Manager Alan Shirkey said the plan is to take stormwater from the L-8 Canal into the reservoir and eventually pump it out into the STA-1 east and west treatment areas.

The reservoir, formerly owned by Palm Beach Aggregates, was sold to the SFWMD after it was mined out.

“We’ve got a flow pattern through the entire L-8 Reservoir,” said Principal Engineer Gregory Coffelt, who explained that the basin will be able to take in up to 3,000 cubic feet per second by gravity flow and pump out up to 450 cfs. “The reason for having such a large inflow is that we can capture the storm events. The purpose of this is to allow us to put water to the STAs in a more metered fashion so that we don’t overwhelm their treatment capacity.”

Shirkey said the reservoir will act as a 15-billion-gallon surge tank that will take a lot of water in all at once, and slowly pump it out at a rate the STAs can accommodate. During the dry season, the reservoir will provide water to the STAs that they would not have otherwise.

The pits in the reservoir have a unique, almost impervious characteristic that makes them ideal for storage. Shirkey said high salt levels in the basins have been going down. “That’s an indicator that you don’t have a source of chlorides seeping into them,” he said. “Once we start filling them up, the chlorides will continue to go down.”

The water going into the L-8 Canal will come from tens of thousands of acres, including the C-51 Basin. “It’s taking care of a lot of acreage,” SFWMD spokesman Randy Smith said.

Coffelt said construction began in October 2012 and includes more than 5 miles of rolled concrete around the perimeter for shoreline protection.

SFWMD representative Gabe Margasak said water from the L-8 was once intended for restoration of flow to the Loxahatchee River, but the SFWMD’s recent purchase of the Mecca Farms property for water storage and transfer will enable a plan to take excess water from other areas.

“That was part of our restoration strategies, and Mecca becomes a source of fresh water for the Loxahatchee River,” Margasak said.

Shirkey said water sent to the STAs filters into the Arthur R. Marshall Loxahatchee National Wildlife Refuge and that, eventually, some of it finds its way to Everglades National Park. He added that the L-8 reservoir will provide some initial settling of sediment before it is pumped to the STAs.

The contract being worked on is for $63 million, which includes the pump station and in-flow structure, and slope protection around the perimeter.

The SFWMD acquired the excavated reservoir from Palm Beach Aggregates in 2007 at a cost of $220 million.

The reservoir is part of the SFWMD’s regional water quality plan to complete six water treatment and storage projects in three flow paths between Lake Okeechobee and the greater Everglades. The projects include more than 6,500 acres of new stormwater treatment areas to remove excess phosphorus that has been encouraging the emergence of non-native species and destroying the original low-nutrient balance of the Everglades.

Since 1994, the state has invested more than $1.8 billion toward lowering phosphorus levels in waters bound for the Everglades through a combination of nutrient source controls and construction projects.

Best management practices at the source, controlling the amount of phosphorus allowed to get into stormwater, have worked in tandem with Everglades STAs to contribute to water quality improvements.

ABOVE: Construction is underway on the foundation for a 3,000-cubic-foot-per-second flowway, which will allow the reservoir to accept stormwater from the L-8 Canal.