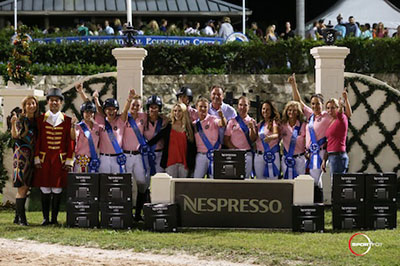 The crowds were out in full force at the Palm Beach International Equestrian Center on the evening of Saturday, Jan. 11 to watch the women’s team earn their sixth consecutive victory in the FTI Consulting Winter Equestrian Festival’s $75,000 Nespresso Battle of the Sexes.

PBIEC also hosted a full schedule of competition during the day, with a win for Lauren Hough and Böckmanns Lazio in the afternoon’s $25,000 Suncast 1.50m Championship Jumper Classic.

Eric Hasbrouck was the course designer in the International Arena for the first week of WEF competition and set the tracks for Saturday’s classes. In the highlight $75,000 Nespresso Battle of the Sexes, a three-phase contest included speed rounds, match races and a six-bar competition.

The first round of competition was the speed round, with a 6 to 4 win for the men. The match races followed, with the men and women competing side by side over identical courses. The men and women tied in that round, each winning five races, to bring the total up to 11 points for the men and nine for the women.

The final six-bar competition was the deciding factor of the evening, with the men leading by two points going in. Four men and four women returned from each team with the opportunity to earn two points per clear round. The competition started at 1.60m (5’3”) in height and moved up to 1.70m (5’7”) through two rounds.

Minikus was the only man to jump a clear six-bar round and earned two points for the men, bringing their total up to 13 points, but he then had a rail down in the second round. Maggie Jayne and Pasmore each cleared round one to bring the women’s total up to 13 to tie the teams. The women moved on to round two, but Jayne had rails down in her second attempt. It was all left to Pasmore, and she and Bibi Sijgje were the only pair to clear the six-bar in round two to clinch the win for the women.

King was very excited to captain the winning team this year. She has been on the women’s Nespresso Battle of the Sexes team every year since the class began and loves the camaraderie between the riders. She also thanked Nespresso for their support of the event.

“I had a lot of pressure on me tonight because we have yet to not win, and I am just glad we pulled it off. Thank God for Catherine at the end,” King said. “It is a great event, and the crowd loves it. The boys against the girls is great because we don’t usually have that. It is fun because it is an individual sport, so we don’t get to do a lot of team competition.”

Michelle McFaul, vice president of community affairs and special events for Nespresso USA, was happy with another exciting Battle of the Sexes. She praised the riders for the great effort they put into it, noting that in addition to the winners, the men’s team would also receive Nespresso machines.

ABOVE: The winning women’s team with Nespresso’s Michelle McFaul, ringmaster Gustavo Murcia and the Bellissimo family. PHOTO BY SPORTFOT