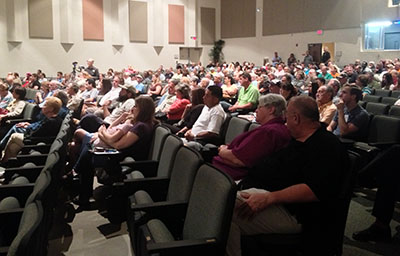 Residents of The Acreage packed the Seminole Ridge High School auditorium Wednesday night to hear a presentation on the planned Minto West development, with a vote showing a large majority of residents opposed to the project.

A total of 650 residents voted at the Acreage Landowners’ Association’s town hall meeting. When votes were tallied, a total of 583 residents opposed and 67 were in favor of the plan. The ALA accepted votes from members and non-member residents with proof of identification.

“Minto is neither our friend nor our benefactor,” resident Jean Edwards said during public comment. “It is a profit-driven corporation out for their own interest and to line their own pockets. They have implied on more than one occasion that The Acreage has no heart, no identity. We have character, heart and soul. We have a way of life we stand to lose if we allow this development to happen.”

The meeting included a presentation by former Indian Trail Improvement District Supervisor Mike Erickson. Although no Minto representatives were in attendance, County Administrator Bob Weisman was on hand to answer questions and hear resident concerns.

The Minto West property was previously owned by Callery-Judge Grove, Erickson explained. The owners of Callery-Judge originally requested to build 10,000 homes on the site — a plan rejected by Palm Beach County. Callery-Judge’s owners later had the site designated an “Agricultural Enclave,” which under Florida law gave the property approval for 2,996 homes. The site was sold to Minto with that approval.

“There are 2,996 homes and 235,000 square feet of commercial space currently approved on the site,” Erickson said. “That’s not very debatable. They bought the property and have the right to build that.”

But Minto has begun the process of requesting an expansion to 6,500 homes along with 1.4 million square feet in non-residential commercial space, as well as other amenities, such as a hotel, baseball stadium and community college.

Erickson explained that The Acreage is still not built out to its full density, meaning there is the potential for even more homes to be built in the area. Additionally, other developments are in the works, including Avenir to the north and Highland Dunes to the west, among others — all which could impact The Acreage, he said.

“There are 21,435 residential units approved out in our area,” he said. “Of those, 13,969 have been built. That leaves 7,466 houses potentially still able to be built, that are already currently approved.”

Some of those homes are currently empty lots that could later be developed, Erickson said. He noted that alone would have an impact on traffic and other services in The Acreage.

This could impact the levels of service in The Acreage, especially if Minto is granted 6,500 homes. Erickson said that traffic is expected to be an issue.

Minto’s current approvals would add 34,438 daily trips on the road. If it is expanded to 6,500 homes, that number would double, he said.

“Minto West could impact our community by 70,000 plus trips per day,” Erickson said. “That is one single car leaving the house and going to a destination. That is considered one trip.”

Developers estimate that the majority of the traffic will go south on Seminole Pratt Whitney Road to Southern Blvd. and east on 60th Street North to State Road 7.

Erickson noted that The Acreage already has traffic problems. Without Minto West in consideration, the long-range plan for roads in the area involves widening several heavily used routes.

“If you look at the long-range planning map from the [Metropolitan Planning Organization], in 2035 they are projecting six lanes for Northlake [Blvd.] east of Coconut [Blvd.] and four lanes west of Coconut. Coconut itself will be four lanes.”

He stressed that these plans exist without 6,500 homes at Minto West.

One of the major impacts the development will have on the community is the cost of building and maintaining infrastructure, such as roads, schools and other necessities, Erickson said.

“In the past, Palm Beach County had one of the most stringent laws. If you were going to develop houses, you had to pay for all the infrastructure. Now developers only have to pay a proportionate share,” he said, adding that the shortfall is made up by taxpayers.

There are several opportunities for Acreage residents to weigh in on the issue. Residents can e-mail the Palm Beach County Commission or show up at meetings. The next public hearing on the issue is a planning and zoning meeting scheduled for Friday, April 11 at 9 a.m. The county commission is slated to hear the issue on Monday, June 9 at 9:30 a.m.

About 25 residents spoke on the issue, some asking questions and others sharing opinions or information. Almost all speakers were in opposition of the development.

Resident Sharon Waite was concerned about plans to include low-income housing in the project. “Section 8 housing is not a community builder,” she said. “It’s not a tax help. They don’t pay taxes. They don’t own anything. They don’t care.”

ALA Treasurer Diana Demarest asked whether the 1.4 million square feet of commercial space includes the baseball stadium, hotel and other aspects of the project. “Is that over and above what they are asking for?” she asked.

Weisman said it did not include the other parts.

ITID Supervisor Jennifer Hager said she and many other residents moved to The Acreage for a particular way of life.

“Most of us came here to escape urban sprawl,” she said. “We are a rural agricultural area, and we love it. I will work with the 2,996 homes and the existing commercial proposals, but I will not support 1.4 million square feet of commercial space from 60th to Sycamore on both sides of Seminole Pratt.”

Resident Yvonne Moritz said she was overwhelmed by the turnout from Acreage residents.

“I am so proud of all the people who have come out,” she said. “We are The Acreage, we have horses, we have our own lifestyle with dirt roads. We are a unique community, and we love it here.”

She encouraged residents to sign petitions against the project and reach out to the county commissioners.

“Those seven people are the ones who are going to say ‘yeah’ or ‘nay,’” Moritz said. “We need to go down there and pack the house with record numbers so that they have to look every one of us in the eye if they approve those numbers [that Minto is requesting].”