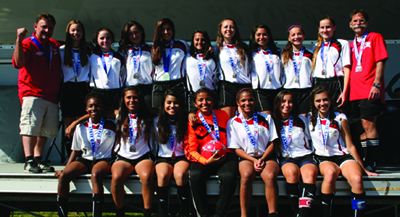 The American Youth Soccer Organization (AYSO) held its state tournament at Wellington’s Village Park Jan. 18-20. Over 100 teams from across the state participated in the state games.

The Okeeheelee U16 girls state champions will be competing for the national title in July 2014 in Torrance, Calif. Teams from all over the country will be participating.

The estimated cost for players and coaches to travel and spend a week in California is $50,000. The league is seeking donations to assist in making the dreams of these 18 young women become a reality, and giving them the opportunity to represent their state and country at the AYSO National Soccer Championships.

Donations are a tax-deductible contribution to a nonprofit agency. Checks can be made out to AYSO 345, and can be mailed to 17314 61st Place North, Loxahatchee, FL 33470.