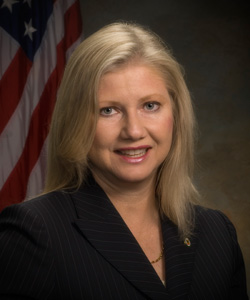 Councilwoman Anne Gerwig believes that she brings a unique and important viewpoint to the Wellington Village Council and hopes voters return her for a second term on Tuesday, March 11.

Gerwig has lived in Wellington for more than 24 years, and in Palm Beach County almost all her life. “This is my stomping grounds,” she said, pointing out that she used to ride horses in the area of Okeeheelee Park before Wellington even existed.

She graduated from North Shore High School and took courses at North Technical Educational Center, receiving certification in architectural drafting. This led to her to a career in engineering.

Gerwig has worked in engineering and land surveying firms all of her adult life. “My first job was working for a residential designer,” she recalled. “I eventually designed my own home in 2001 in Paddock Park.”

Active in the community for many years, she was elected to a four-year term on the council in 2010.

While her top personal accomplishment is the success of her children, two of whom are in college and another a sophomore in high school, Gerwig feels her top accomplishment on the council has been dealing with challenging budget years.

“We’ve had an economic downturn that devastated the real estate market,” she said. “Seeing the budget go significantly down while continuing to provide a high level of service, I think that is our biggest accomplishment.”

Her favorite accomplishment was the rebuilding of the playground at Tiger Shark Cove Park two years ago. “It was getting a little aged, and we rebuilt the whole park pretty much from the ground up,” Gerwig noted.

Gerwig believes that she is the best person to serve on the council for the next four years because of her strong record. “I’ve taken sensible approaches to what’s presented to the council,” she said. “I don’t play favorites. I don’t have a team that I’m on. I treat everyone who comes before us, whatever their issue is, in a fair manner.”

Her top goals for the next four years include the pursuit of a local performing arts center. “We have so many talented kids and young adults who love theater and productions,” she said, explaining that the Wellington Amphitheater is great, but not a facility for high-quality productions. “I’d really like us to have a mini-Kravis Center, and I like that civic site at the mall.”

Gerwig would also like to see drainage issues resolved in a manner that will please the people who want to preserve the palm trees along Aero Club Drive. She would like to have a public discussion on the issue before further action is taken.

But there are similar drainage issues around the village that also need action. She pointed out that after recent storms, Forest Hill Blvd. was submerged for a longer period of time than it was designed to withstand.

“It’s not just the drainage issue; it’s safety,” Gerwig said. “People couldn’t get out, and the entire Equestrian Preserve Area was pretty much landlocked.”

Gerwig also believes civility continues to be a big issue for council members. “I think we have come a long way, and we are working together,” she said. “I think the community realizes that it has been a difficult time. When your team isn’t working together, it affects everyone, at least from a perception issue. I want to get the team back functioning.”

She said her opponent’s solution would be to side with the three council members who are usually in the majority, but Gerwig thinks that’s not healthy.

“I think we all have opinions, and we bring something different to the table,” she said. “When we are passionate about the way we feel, it can be divisive, but it’s also getting all the points out.”

Gerwig would like to get the Wellington Community Center rebuilt without moving the Wellington Tennis Center — and she voted that way twice in early 2013 when the issue first came up.

“I think we have the synergy of that facility,” she said. “I know it’s crowded. The seniors have a conflict with parking when they are there for their lunch day, but in the redesign process, I just think we could do better and not move tennis.”

Asked about her view on the current structure of village government, Gerwig said, “We have an incredible staff of talented people, and I feel the loss of some of the upper-level staff has been an immediate issue.”

Asked how she rates the job Village Manager Paul Schofield is doing, she said she’d give him a 7 on a scale of 10, but added that he is being asked to do a near-impossible job.

“That’s a job I can’t believe we can get anyone to do because you have a five-headed boss, and you could be fired every other week,” she said. “I think he does it as well as anyone could. He’s very, very smart.”

Gerwig said the village’s work to improve troubled neighborhoods has been expensive, but important. She noted that it is often difficult to get residents on the same page regarding solutions.

For example, Gerwig said the village made several proposals in the Yarmouth area, and residents complained about the village’s proposed solutions. “We had some neighborhood meetings,” she said, “And now we’ve put it back to the residents for their ideas.”

She thinks the village’s medical arts district proposal is a great idea, but Wellington cannot control private property. “All we can do is help them in the planning process, but the owners of the property are ultimately going to decide,” Gerwig said.

She pointed out that the Lake Erie College of Osteopathic Medicine, which has 44 residents training at Wellington Regional Medical Center, would like to expand, and she feels Wellington should help them do so. She also supports the idea of a hospitality house for patients receiving treatment and a campus where hospital employees, such as the residents, could live.

Over the past year, the council’s relationship with Wellington Equestrian Partners CEO Mark Bellissimo has improved, and lawsuits between WEP and the village are in hiatus for the time being. She pointed out that Wellington is caught in the middle of a feud among equestrians.

“Hopefully, all the lawsuits can come to an end, but it’s going to be difficult,” she said, explaining that Bellissimo’s horse show model is different than the horse show model of the past. “No one ever looked at it as if it was going to be a business. It was something people enjoyed doing. The concept of Mark Bellissimo looking at it as a business is quite different, and I can understand why some people wouldn’t be happy with that.”

The Palm Beach County Commission on Ethics and the Office of Inspector General has weighed in on several issues in Wellington. Asked whether she thinks the office is being abused, she said that Inspector General Sheryl Steckler has told her that the office makes an effort to determine which cases are genuine concerns and which are motivated by politics.

“That’s difficult to do, and I think we have gone through a learning curve in the process,” Gerwig said. “I think it is getting to where the office has an idea when someone comes in whether it’s a true concern from the community.”

Asked what she sees for the village’s K-Park land on State Road 7, she said the village has come to realize it cannot support an additional 67 acres of recreation, but maybe it can keep a portion of it.

“Maybe we can sell off the commercial portion and let that fund whatever recreation we still think we need,” Gerwig said. “We still have a need for open-field play. We always will as long as we are a growing community.”

Wellington Christian School recently announced its pending closure, and the site could come before the council for a zoning change. Asked what type of uses she would accept, Gerwig said she’s hearing that the proposal is for a charter school. “That would not be a significant difference, but it would require land use changes,” she said.

The council recently voted to halt fluoridation of the village’s water — a change Gerwig did not support. She said some information presented by fluoridation opponents was misleading, and she based her support on conversations with medical professionals, including her dentist, pediatrician and internist.

Gerwig said the perception that she is aligned in a slate with Vice Mayor Howard Coates, who is also running for re-election, is not true.

“Howard has always been on his own, and so have I,” she said. “I have always looked at things on their merits, and Howard and I don’t always agree. Even when we do agree, it’s for different reasons. Either way, I’m not on a slate with anyone.”

While she is also perceived as being close to Bellissimo and other equestrian interests, Gerwig called that an unfair assessment. “I’ve done everything the same as I would with other projects,” she said. “I don’t have a personal relationship with Mark Bellissimo any more than I do with any other entity in Wellington.”

Asked about large amounts of outside money spent in the 2012 election, she said she believed local control should be the basis of local government. “People don’t feel good about it, and they shouldn’t,” she said.

Gerwig has been dismayed by the influx of partisan money in the current election, pointed out that the municipal election is nonpartisan by law. “To me, the issues that we deal with have nothing to do with partisan issues,” she said.

Gerwig said voters should vote for her because she has done a good job serving their needs. “I’m very proud of my record,” she said.