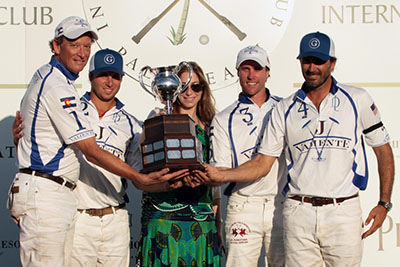 Behind the leadership of 10-goaler Cambiaso, who had been injured in semifinal action, Valiente was able to bust the game open, scoring seven times in the fourth and fifth chukkers.

In a defensively oriented opening chukker, Cambiaso scored the only goal midway through the period for a humble 1-0 lead.

Torres converted a 60-yard safety to open the second, 2-0. Consecutive goals from Pablo MacDonough and his brother Matias MacDonough tied it up at 2-2. Caset broke the tie with a short penalty shot for a goal, 3-2, and Torres made it 4-2 on a great individual effort in the final seconds of the chukker.

Van Andel scored for Orchard Hill to open the third, 4-3, but Cambiaso responded with a goal from the field for a 5-3 Valiente advantage. Chavanne kept the pressure on Valiente with the final goal of the period. Valiente continued to lead, but Orchard Hill was within a goal of the lead.

Caset converted a 40-yard penalty shot for a goal to open the second half, followed by a goal from the field to make it 7-4. The MacDonough brothers responded in kind, with single goals from Pablo, then Matias to bring Orchard Hill to within one goal, 7-6. Caset converted a penalty shot for a goal, and then Cambiaso added a goal from the field for Valiente to make the score 9-6. Pablo MacDonough scored on a 40-yard penalty shot to end the chukker trailing Valiente, 9-7.

Valiente’s pace seemed to quicken in the fifth. Cambiaso scored back-to-back goals for a comfortable 11-7 lead. Matias MacDonough converted a 30-yard penalty shot to make it 11-8, but Caset countered with a penalty goal of his own. The period ended with Valiente on top, 12-8.

Cambiaso and Caset led the Valiente attack with five goals each. Torres added a pair of goals for the victory and was named MVP. The MacDonough brothers scored three goals each. Van Andel and Chavanne each added a goal. Bob Jornayvaz’s horse, Boeing, received Best Playing Pony honors.

The 2014 USPA Piaget Gold Cup is scheduled to begin at 3 p.m. on Friday, March 7 with a game between Alegria and Flight Options. A Saturday morning contest will feature Audi and Orchard Hill.