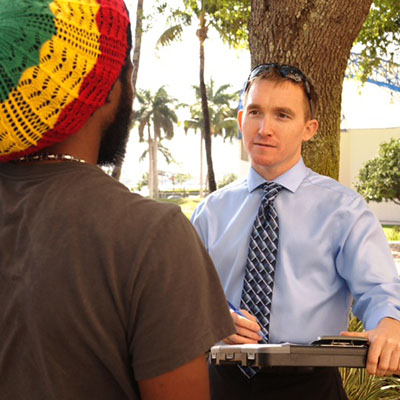 Ed Tague is on the lookout for fellow veterans, specifically homeless veterans.

The former Marine is leading a team of volunteers and Palm Beach County workers, doing a homeless registry this month. Beginning Wednesday, March 26, Tague and his group will visit soup kitchens, homeless camps and anywhere else the homeless congregate.

“We will be in parks at 4:30 in the morning, wherever they’re going to be,” Tague said.

While he understands parts of the assignment could be dangerous if some of the homeless have weapons or dogs, “the most important thing is being patient and trying to understand their situation,” he said.

For their own safety, the task force will be accompanied by officers from the West Palm Beach Police Department and the Palm Beach County Sheriff’s Office.

The 31-year-old Wellington native did three tours of duty in Iraq and admits he faced challenges when returning to civilian life. He said he signed on for the job hoping his experience will help him relate to veterans he may encounter.

“Many don’t know how to transition out of military life,” he said. “They are used to being told what to wear, what to eat, how high to jump. They are not ready to transition, so they self-medicate with alcohol or drugs.”

The three-day count, which will stretch across the county, is part of the 100,000 Homes Campaign, a national movement involving more than 230 cities, counties and states.

Tague, along with volunteers, staff and partners of Palm Beach County Human and Veteran Services, will create a database to identify the most vulnerable homeless individuals in the area to get them immediate, permanent housing.

The Homeless Coalition of Palm Beach County is funding the coordination of the project. The last day of the registry coincides with Project Homeless Connect, a quarterly event that brings together service providers.

“This is a community effort,” Homeless Coalition Executive Director Marilyn Munoz said. “That’s what it will take to end the issue of homelessness in Palm Beach County — all of us committing to work together.”