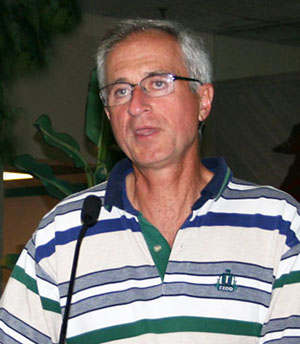 The Palm Beach County Commission approved a resolution Tuesday establishing a county administrator selection advisory committee, as well as the scope of work for an executive search firm to coordinate the hunt for someone to replace County Administrator Bob Weisman (shown above).

Weisman will retire in August 2015 after 35 years with the county, 22 as administrator.

Assistant County Administrator Brad Merriman recommended that the advisory committee be made up of members selected by the commissioners, one by each commissioner, with the mayor’s appointee acting as chair, along with an appointee from the Palm Beach County League of Cities and another from the Economic Council of Palm Beach County.

Commissioner Hal Valeche asked about the nature of the advisory committee. “There are appointees, but in the backup material it sounds like they’re consulting mostly the consultant rather than us,” Valeche said.

Merriman said the advisory board members can also consult with the commissioners, but they cannot talk to each other outside of the meetings.

“We hope to hire the consultant in September or October, and then it will be two to three months before they meet with the commissioners and the advisory committee. Why such a long lapse of time?” she asked.

Merriman said that was a worst-case scenario. “We’re going to do everything we can to compress the time frame,” he said. “The first part of the process is to do the [request for proposals], select the consultant, and as soon as we get that piece done, then we’ll move it forward as quickly as we can.”

Merriman said he expects the RFP to be advertised soon. “The business of executive search is pretty standard,” he said. “The entities that are out there are very used to doing this, so we’ll have the RFP out very soon.”

Burdick made a motion to approve the resolution, which carried 7-0.

At a meeting in March, commissioners agreed that a national search would not preclude hiring a new administrator from within.