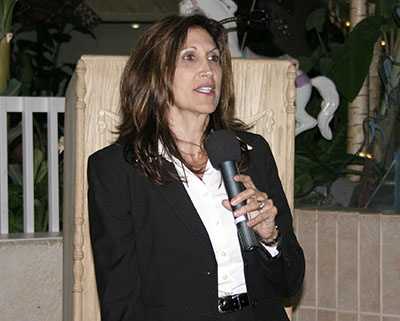 Outgoing Palm Beach County Inspector General Sheryl Steckler reviewed the challenges and successes of her past four years as the county’s first public watchdog at a meeting hosted Wednesday by County Commissioner Jess Santamaria at the original Wellington Mall.

John Carey was hired this month as the county’s new inspector general. He will begin his job June 23, at the start of a four-year contract. Steckler’s last day is June 27.

Carey’s previous job was as inspector general of the U.S. Defense Intelligence Agency.

When Steckler arrived in 2010, she had jurisdiction originally only over Palm Beach County government. “I really walked into pretty much a stack of papers, boxes, a desk, a table and a computer, and that was it,” she said. “Since then, we have done lots of things. We’ve made policies and procedures. At the end of the day, we have built the foundation for the Office of the Inspector General.”

Shortly after she went to work, all 38 municipalities came under the office’s jurisdiction, along with the Solid Waste Authority.

“In the blink of an eye, we went from one jurisdiction to 41 jurisdictions,” Steckler said.

One of the most critical things that has challenged her is the question, “Who watches you?” she said.

“Lots of people watch us,” she said. “For example, the Association of Inspector Generals. We have a peer review, which will be coming up next year. The Commission for Florida Law Enforcement Accreditation; we were accredited in record time with a flawless and exceptional accreditation.”

She said that the report, as well as all the reports the office has produced, can be found at www.pbcgov.com/oig.

“We built that accreditation very strongly because of all the attacks we were getting, and because you needed the comfort to know that we knew what we were doing,” Steckler said. “Those are professionals in the field who are at least letting you know that we know what we’re doing.”

She added that the office has received Criminal Justice Agency status, which expands the office’s access to information and databases that can only be used for certain purposes.

“It is very difficult to get this status, especially the first time around,” Steckler said. “In fact, my county partners went three or four times before they got it. We actually got it on our first try; so it’s another impressive part of the office that we are recognized as.”

One of the most significant accomplishments of the office over the past year has been with piggyback contracts, she said.

“Piggybacks are a big issue, especially for smaller municipalities,” Steckler said. “They’re not wrong, but you’ve got to do it right.”

She explained that piggyback contracting is when a municipality buys something similar to another municipal contract, thereby circumventing the bidding process.

However, there are caveats, including that the contract has to be active.

“We found a lot of issues throughout the community, and we did some training for the municipalities,” she said. “We have topic training with the municipalities and the county departments separately, and they’re learning a lot. Our business community is another very important part for our stakeholders to understand. When we see things in the business community where it’s not fair and equitable, they need to step to the plate and help us fix that.”

Through 150 trainings and speeches over the past four years, she said her office reached more than 5,400 people. “A big part of it was you didn’t know what we did, and I think today you have a much better, clearer idea of what we do,” Steckler said.

Reports the office has published on its web site include one on police radio communication issues, which emerged from a West Palm Beach contract.

“Nobody was talking to each other between the cities, and it was really becoming a highly critical issue, because if your police radios don’t work, you’re at risk,” she said. “Plus the officer is at risk, and being that I have a law enforcement background, if my radio is not working, that’s not a good thing.”

Her office decided to do an enterprise audit and look at the contract, starting with the way it was written, which did not protect the government.

Steckler said one of the issues that was worked out in a consortium was that the contract did not provide a powerful enough signal to penetrate the large buildings in downtown West Palm Beach, which was addressed.

Another problem has emerged from the county’s Engineering Department bid policy.

“There’s a requirement under the law that when you do the bid process, you have to score and rank, but what they’re doing is if 15 people bid, they are subjectively eliminating seven of them, and then they’ll rank and score the eight,” Steckler explained. “That’s completely against the law. We’ve asked the county administrator to look at it, who’s not quite agreeing that they’re in violation of the law. They need to look at this issue, because they are. This is a serious issue, and it’s not going to go away.”

Steckler said despite the challenges and resistance, she is seeing significant progress. “You can see the ship starting to turn,” she said. “There are fewer and fewer people against the office. They may not like the office, but they are not going to fight any more.”

To date, the office has issued 350 recommendations to have better controls, of which 86 percent have been implemented and another 11 percent are being implemented.

“That’s incredible for an environment that fought this for so long,” Steckler said. “That’s how you change a culture — you put the controls in place.”