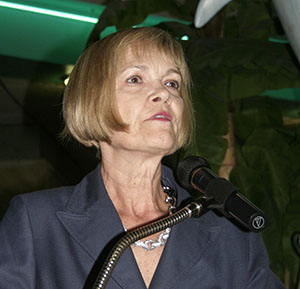 Elizabeth Bloeser, Palm Beach County’s director of the Office of Financial Management & Budget, addressed the challenges of preparing next year’s budget despite an increase in property values at a meeting hosted Wednesday by County Commissioner Jess Santamaria at the original Wellington Mall.

County staff presented the Palm Beach County Commission with its first look at the Fiscal Year 2015 budget on June 10.

“While the county’s entire budget exceeds $3.9 billion, we mostly focused on the general fund portion, which is about $1.1 billion,” Bloeser said. “That is where the property tax revenues that you pay goes. That’s the most important thing for most taxpayers.”

The general fund is balanced at the same tax rate as last year, 4.7815 mills. “That’s a good thing, no increase in millage rate, but because property values went up 6.8 percent, 1.5 for homesteaded property because of the Save Our Homes cap, it does mean that you’ll pay more in straight tax dollars to the county this year coming up,” Bloeser said.

The total tax revenue of about $693 million, a little over half of the revenue in the general fund, is almost $41 million more than last year, but it did not meet the increased costs.

“It sounds like a lot of money, and it is, but we found a way to use that $40 million and then some — us and the sheriff — so again we found ourselves with really nowhere near as much as we would love to have in a perfect world,” Bloeser explained.

“That is proposed,” she said. “We will be back in front of the board on July 22 for further discussion of this budget. We will have new, and what we consider final property values, and hopefully we will get more tax revenue at that time.”

Overall, county departments have increased about 6 percent, which accounts for about $17.4 million in ad valorem revenue.

“Most significant is Palm Tran. They’re close to $7 million in increases between fixed routes and buses you see driving around, and what we anticipate having to spend for Palm Tran Connection next year. That’s the special para-transit services we provide,” Bloeser said.

Part of it includes a $17 million bond for the county to buy its own para-transit vehicles rather than go through a subcontractor.

That lower amount would make the sheriff’s overall budget increase about 6.3 percent, which is more in line with other county departments, she said.

The sheriff’s budget also includes about $6.3 million in capital spending, including cars and other equipment, while other county departments have budgeted about $11 million.

“Unfortunately, there is nowhere near enough money set aside for the road resurfacing and maintenance issues that we would like to have at this point,” Bloeser said. “The money’s just not there.”