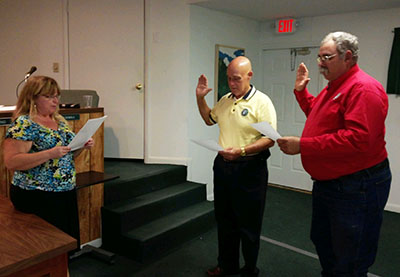 During the annual financial report, Supervisor John Ryan noted that a $26,000 deficiency in revenue anticipated for the fiscal year ending in September 2013 should be more than made up for with repair work done by the district, financed by the U.S. Department of Agriculture and the Federal Emergency Management Agency over the past year.

Ryan said the district’s $1.6 million in revenue had been a 20 percent increase over 2012, but had still resulted in a shortfall when expenses were totaled. “We’ve actually had a further increase in revenue, and we will be reporting a surplus,” Ryan said.

LGWCD Administrator Stephen Yohe gave an overview of programs staff had put into place during his first year on the job.

“Initially, I thought it was important for transparency and communication to come up with what we call a weekly report,” Yohe said. “It actually details what staff did Monday through Friday, particularly the district administrator.”

Yohe said the report is available to the public and is in the consent agenda for the monthly board meetings. This is further supplemented by the district administrator’s monthly report.

The district also keeps a weekly log. “Any landowner who calls in to us is recorded on a daily basis,” he said. “As part of that, there is also a status of resolution. What was the question of the landowner? Did we satisfy their inquiry? If not, what steps are we going to take to satisfy that inquiry?”

Another major accomplishment in the past year was the lease/purchase of the new long-reach excavator, which enables the LGWCD to perform its own canal maintenance rather than subcontract that work, as well as a new long-boom tractor mower.

“It can reach to the bottom of a canal bank to the water and really clean up the area and help control aquatic vegetation in the canals,” Yohe said.

Another major accomplishment happened last summer when the USDA decided that that it was going to fund 75 percent of the excavation and restoration of canal segments, which the district has been working on.

“Most fortunate was the lease/purchase of the two pieces of equipment, particularly the excavator,” Yohe said. “Prior to acquiring that, we were actually paying the contractors 100 percent but only getting reimbursed 25 percent, so it was money out of the district’s pocket, unlike how we’re performing now, doing the work in-house with our own excavator.”

The project of dredging the canals to specifications started with A Canal South to Southern Blvd., which has been completed, and they are now digging out A Canal North, which he expected to be finished in the next few weeks.

They have also completed E Canal North running along the west side of the Royal Palm Beach Pines Natural Area, and the portion of North Canal south of the preserve.

“We also cleaned all of the culverts under Okeechobee Blvd. through Shenandoah Construction on a piggyback [bid] with the Northern Palm Beach County Water Control District,” Yohe said. “We also cleaned out some suspect culverts throughout the district to help the water flow more effectively.”

The district has also been monitoring and providing input to FEMA regarding the flood maps that were drafted last year and are still open to revision.

“We have been encouraged to think that’s going to make an impact in modifying the maps so that the increase in insurance to the landowners won’t be as drastic as what the original issuance of the draft maps indicated would occur,” he said. “We’re monitoring so that when those maps come out, we will be the first to see them.”

Yohe said the district has been working closely with the Town of Loxahatchee Groves on common issues.

“We are working hand-in-glove with staff and council,” he said. “We are certainly willing to do whatever we can to advance the town’s causes and enhance what we can do to perform for them.”

The district has also updated its web site.

“It’s a work in progress; it’s a living project, I should say. It will never be complete,” Yohe said, explaining that he is still trying to get new photographs and biographies, including some of the supervisors and staff.

He said the district is using the same consultant as the town to enhance its web site.

Ryan said one of the things that came out of the last legislative session was a bill requiring enhanced recording and accessibility for special districts by Oct. 1, 2015.

“Basically, everybody has to have a meaningful web site that has data,” Ryan said. “The board has requested that [Yohe] improve the transparency of the work that’s being conducted by the district, and I think he has done an admirable job of that.”

Ryan said having the district reports on the web site will reflect a more open government. “I think it will be very meaningful to the residents,” he said.
ABOVE: Supervisors Don Widing and Frank Schiola take the oath of office to begin their new terms.