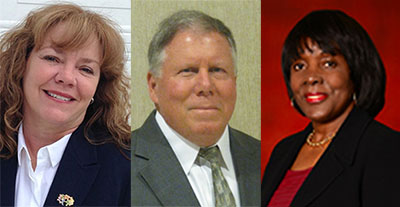 Two candidates are challenging incumbent Marcia Andrews for the District 6 seat on the Palm Beach County School Board.

Child advocate Carla Donaldson and retired school district Chief Operating Officer Joe Moore, both of Wellington, had qualified for the ballot as of Wednesday, although filing does not close until Friday at noon.

The candidates will face off during the Aug. 26 primary election. If no candidate gets more than 50 percent of the vote, the top two vote-getters will advance to the general election.

Donaldson said that her goal is to return the focus of the school board to children in the classrooms.

Donaldson said for the past five years, the focus has been adults blaming the state or the classrooms for not giving students sufficient education.

“There has been more of a blame game than there has been an actual plan of how to increase performance in our students, whether it’s for the work force or for college,” she said. “Everything has been on college-ready, and we haven’t focused on the needs of our students in our classrooms. The conversation has not been about the students. It has been everything but, and I want to bring the focus back to the classrooms.”

Donaldson, who has two school-age children, said the school board has a set of districtwide goals that are not measureable.

“I’ve been active in the community since we moved to Wellington, with the Moms Club when they were little, and it’s just grown from that point,” she said.

Moore, who retired as the school district’s chief operating officer in 2011, said he is running because he has a strong passion for public education.

“Both my wife and I are products of public education,” he said. “My two daughters are successful products of schools in the western communities. They had a great education down here, and my wife is a lifelong teacher. She has 32 years with the Palm Beach County School District and still has a strong passion for teaching.”

Moore said the current school board members do not have the skill set that he does.

“I have a strong financial management background, and the board currently does not have anybody with that kind of background,” he said. “I’m retired and want to give back to my community. I think this is the best way that I can do that.”

Moore added that he thinks the school board struggles to arrive at a consensus on major policy issues. “I think I can help with that,” he said. “All of them have strong opinions about some of the policies coming before the board, but there’s not a clear articulation of the board position on some of those policies.”

Moore said his campaign is not personally directed at the incumbent.

Moore said he would equitably represent all of District 6, which reaches from west of State Road 7 to the Glades from Boynton Beach Blvd. to the Beeline Highway.

“I think part of the job of a school board member is representing that entire region, which means that the schools in each of those areas get the appropriate attention they need,” he said.

Moore worked with the South Florida Water Management District for 30 years before he came to the school district for 10 years. He was on the board’s volunteer Financial Advisory Board for five years before that.

Andrews, finishing up her first term on the board, said she has worked hard over the past four years for the students and parents throughout District 6.

“I have put in place many new initiatives to improve student achievement, first with the leadership in getting three badly needed new schools built in District 6, as well as the reopening of West Tech Educational Center for vocational programs, which is helpful as we work toward our goal to make sure all students are career- and college-ready with industry certification,” she said, adding that the legislature provided $426,000, as well as $150,000 from the Hill Foundation, to reopen the center.

She has also worked with education advisory boards in Royal Palm Beach, Wellington and the Glades.

“We’ve made so many wonderful accomplishments together working as a team,” Andrews said. “One I’d like to highlight is working with the Wellington Education Advisory Board. We were able to work together with the Wellington Village Council to reinstitute the $25,000 funding for programs for the lowest 25 percent of the students in all of the Wellington schools.”

She partially credits that program for Binks Forest Elementary School being one of the top-scoring schools in the state on the FCAT this past year.

“The state does put an emphasis on how well you pull up that lowest 25 percent,” Andrews said. “It’s always a great school, and they score well anyway, but they really scored well this year.”

Andrews said she has also worked with advisory boards to provide needed information to parents and the community to help them stay abreast of things that are happening in the school district.

“That did not happen before me at this level,” she said. “I have made this a priority in my four years to be at those meetings every month to make sure parents can see these programs on television and the web sites, and they can respond back to the board with questions.”

Andrews noted that District 6 schools are generally high-performing with mostly As and Bs, but she continues to focus on supporting students, especially those in the most need of help.