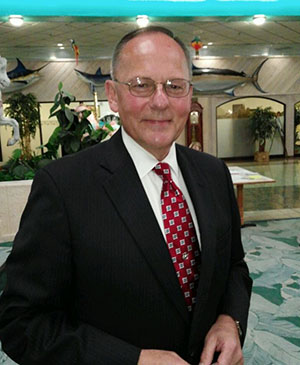 Carey (above) replaces a beleaguered Sheryl Steckler, who left the position in June when her contract expired, to return to her family in Tallahassee after four years of fighting to establish the new position.

Carey said the resistance to the new office does not disturb him.

For the past eight years, Carey was the inspector general for the U.S. Defense Intelligence Agency.

“I’ve been in tussles,” he said. “I’ve been in fights at the local level. I‘ve been in tough situations. I’ve been in combat — actual combat and in political combat in D.C., so I’m ready for the situation we have here. I know that we can overcome some of the challenges and do some really good things for the citizens of Palm Beach County.”

Carey recalled that several years ago, he was at a conference attended by many inspectors general, where U.S. Sen. Joe Lieberman gave a speech about the importance of democracy and its power.

“One of the things that he said is that the strength of democracy comes down to the trust of the citizenry in government,” Carey recalled.

The next speaker was Federal Reserve Chairman Ben Bernanke who said, “Ultimately, what inspectors general provide is confidence in government.”

Carey said he will rest his faith in the citizens of Palm Beach County.

“The citizenry knows,” he said. “They know that there’s somebody out there for them who is detached and independent. They’re not part of the executive side or legislative side. They have this unique independence that they can look and shine the light on things and make recommendations. Inspectors general speak for the people. We provide that trust in government.”

He said the purpose of his office is to make government better.

“We do that by providing independent, objective oversight by shining the light on what’s going on in the government and making it transparent,” Carey said. “More transparent so everybody can see what’s going on.”

Carey broke down the office’s mission into three parts: insight, oversight and foresight.

Insight is through audits, reviews and objective recommendations.

Carey said that in his experience, people who break the public trust are few.

“I can tell you the vast majority of public servants are good people,” he said. “We are trying to be good stewards of the taxpayers’ dollars. They are trying to do a good job. We try to help the good people, in and out of government, by making these recommendations to make government better.”

But there are people in government, in business and everywhere in life who break the trust.

“There are folks who are really bad, and there’s folks who just use poor judgment,” Carey said. “And the inspector general is on the other side. We take care of that aspect, too.”

The oversight role is not only to make sure taxpayer money is being spent in compliance with the law, he said, but also to root out fraud, waste and mismanagement.

“We will look for that, we’re there to find it, and we bring those people who have broken the public trust into light so the public can take appropriate action,” Carey said.

In the foresight role, inspectors general not only react to allegations brought to them, they also try to prevent things from going wrong. He explained that the inspector general has an office that looks at contracts and procurements to assure that they are not taking improper actions that could lead to problems in the future.

Carey noted that Palm Beach County’s Office of the Inspector General was supposed to have about 40 staff members, but after four years, it has only 23 due to funding shortages.

“We’ve got a small team, but we’ve got a good team that has done some really great things,” he said.

The office’s budget is currently about $2.8 million a year, which he said might seem like a lot of money, but it’s only about $2 per year for residents in the county.

He pointed out that in the four years the office has existed, it has either identified or questioned costs not properly documented or avoidable amounting to about $20 million.