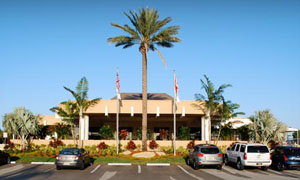 Members of the Wellington Village Council got an update last week on the $12.5 million twin projects of rebuilding the Wellington Community Center and building a completely new Wellington Tennis Center.

At the July 8 meeting, Director of Operations Jim Barnes gave an update on progress since the council approved a bid for the work in March.

Barnes said the updated community center site plan is similar to the one originally proposed by the design-build team.

“We really don’t anticipate any changes to the footprint of the building,” he said. “What we’re working on now are refinements to the internal layout and distribution of the program space in the facility.”

As with the original proposal, there will be an area to the front of the building that is open green space that can be programmed or used for informal gatherings.

Possibly the most dramatic and functional difference will be the elimination of the steep hill visitors need to climb to get into the current building.

“We won’t have the grade issues that we currently have,” Barnes said. “We will be accessing this at grade to the parking lot. The building and the entry will be at the same grade.”

Councilman Matt Willhite was concerned about the driveway to the entrance having parking spaces.

“It comes in to what is basically a bunch of parking spots,” Willhite said. “Wherever the vehicles go, they have to meander through parking where people are pulling out. I made a request to the design team to see what the feasibility is of continuing that road straight out and close the other driveway.”

Willhite thought that the driveway redesign would make more of a straight shot that would reduce the number of headlights shining into the amphitheater during shows, and make better and safer travel throughout the parking lot.

“I think it makes more of a direct route, and it pulls vehicles away from the pool area where we potentially have children running around,” he said. “If we’re going to look at reconstruction and reconfiguration, it appears that this would be the best time to do that.”

Barnes said a quick look at the parking configuration was more of a trade-off of spaces, which is about 80 additional slots.

Councilman Howard Coates said one of the key goals for redesigning the complex was to gain additional parking, and he would not want to take away from that.

Councilwoman Anne Gerwig was wary of redesigning the driveway that close to Forest Hill Blvd.

Barnes said they would look into it not only from engineering and design perspectives, but also to see how it would play into the overall program.

He said the first floor as proposed would have multipurpose program spaces, except for arts and craft rooms, to accommodate youth, adult and senior programs.

The largest space will be designed to accommodate large banquets. It will also function as two spaces with the use of a partition, although the maximum capacity has not yet been finalized.

“It could probably accommodate upwards of 220 or 230 in a seating capacity standpoint,” Barnes said. “With the adjacency of the catering kitchen on the first floor, it could accommodate those types of uses.”

Three elevators would provide access to a larger facility and office space on the second floor. Two would be adjacent to the entrance and the other at the opposite end of the building near a storage area for moving freight and catering purposes.

Barnes added that the overall design goal is to maximize the view of the lake and other open space around the building.

The large, 4,500-square-foot events hall on the second floor will not only provide a vista of the lake, but also have open, fresh air capability.

“The event hall actually cantilevers out over the first floor so that space that you would assume to be one continuous balcony is actually two types of spaces, one enclosed, air-conditioned space, glass so you still have the views, and the other one is open air,” Barnes said.

That space is expected to seat more than 300 people, although the allowable fire capacity will probably be more than that, he said.

A second-floor catering kitchen will have the capacity to expand to a full kitchen, if that is needed in the future, while a second-floor conference room will also double as a green room or bride room for weddings.

Barnes noted that a full stage was not recommended by design staff for that room because it would not give full benefit if it is not completely rigged with lighting and other equipment. However, there would be a temporary stage.

The exterior design would complement the adjacent municipal complex, with similar colors and roof types.

The Wellington Tennis Center, which will move to a new facility on Lyons Road, is similar to the original plan as proposed, except that they have stayed with the original 21 courts with Har-Tru surfaces and an underground irrigation system, but have the ability to accommodate future expansion of six regular courts as well as two center courts with bleachers.

The tennis center building would be two stories, or 3,700 square feet, with an elevator and two stairwells, and have 144 parking spaces. The second floor would have an air-conditioned viewing lounge as well as an open wrap-around balcony.

Barnes said they are looking at a groundbreaking in the fall for the tennis center with an opening in April, leaving about seven months’ construction time.