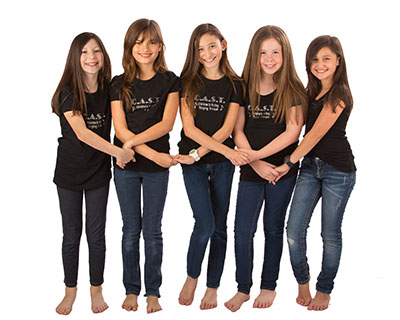 Over the past year, the Children’s Acting Singing Troupe, also known as CAST, has been exhibiting its talent all over Palm Beach County.

“CAST was developed because we wanted the girls to volunteer and give back,” said Manda Galin, Lauren’s mother. “Since many of the places said they were too young to volunteer, CAST was the way for them to volunteer while doing something they love.”

CAST is set up as a nonprofit theatrical group, and each girl has an organization she raises money for.

The girls take voice and acting lessons, and a couple take dance lessons, too. Supplementing the girls’ talent is the support of their parents. Mothers Manda Galin, Caroline Tummino, Devi Master and Kathren Ogg take part in arranging rehearsals, picking music that the girls agree on, setting up venues, staging the lighting, operating the sound systems and purchasing all of the costumes and equipment.

CAST now performs at five or six events each month, and the girls rehearse regularly on their own and with a choreographer. Practices take place at the Versailles clubhouse.

CAST’s first rehearsal since the start of summer break involved several adjustments to new equipment, practicing new material and perfecting the old ones. The group upgraded from microphone stands to new wireless headset microphones. Now the girls have the ability to do choreography and sing simultaneously.

The soundboard, managed by Devi Master, took some getting used to as well, since it now controls the five headsets and the audio output of each. The girls were introduced to “So Long, Farewell” from The Sound of Music and are soon to be working on holiday songs with the goal of staging a big holiday revue.

Songs performed previously were fine-tuned and changed to include more choreography. Such songs retouched were “New Girl in Town” from Hairspray, “It’s a Hard Knock Life” from Annie, “Omigod You Guys” from Legally Blonde, “If Momma Was Married” from Gypsy and several others. The mothers, all in attendance, helped the singers with their cues and harmonies.

CAST has also made a name for itself in the senior community from doing shows at the Royal Manor Nursing Home (Royal Palm Beach), the Edgewater Pointe Estates retirement community (Boca Raton), the Mid-County Senior Center (Lake Worth), the Pointe at Newport Place assisted-living community (Boynton Beach) and at NuVista Living (Wellington).

The audience and setting of the venue determine the choice of songs. Nursing-home residents, for example, are treated to theatrical oldies; the Rock & Rib Fest attendees heard country tunes; and outside scenes get more contemporary songs. CAST incorporates solos, duos and trios in its playlists.

The girls rarely turn down an event. “I enjoy the opportunity to show my passion in what I like to do — singing with my friends,” Carianne Tummino said.

The group is looking into professional management to help book venues, work with the singers and choreograph numbers. Regarding CAST’s future, Jade Master said, “Hopefully, we will continue to get more members and attend more events to raise more money for each charity we help.”

The Children’s Acting Singing Troupe will continue to amaze audiences with the girls’ outstanding voices.

For more information, find them on Facebook at www.facebook.com/castcares. To help, make a PayPal donation or offer other support, e-mail kaizen13@comcast.net.