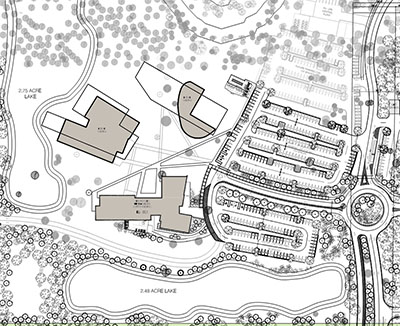 The Loxahatchee Groves Town Council heard a report Tuesday from Palm Beach State College on plans for the development of its new 75-acre campus at B Road and Southern Blvd.

Director of Facilities John Wasukanis said the plan has not changed significantly from when the college received its comp plan and rezoning request several years ago.

He said significant buffers are still in the plan, including between the 25-acre commercial component in the southeast corner of the property, which will be developed separately from the campus.

The parcel has cypress stands and wetlands that will remain, with buildings and other infrastructure built around them, he said. Development of the site will deviate from the college’s other campuses in that they usually have a perimeter road completely around the campus, with parking immediately inside the road and the buildings at the center.

“We looked at this particular site and looked at a number of different options and felt a loop around the entire site would not be an enhancement,” Wasukanis said, explaining that it would destroy much of the natural vegetation, and the loop would be a more impervious surface that would add to stormwater drainage requirements and require a larger retention pond and the removal of more trees.

Instead, they came up with a road that enters the site from the Southern Blvd. entrance, goes outside the commercial component and eventually ties into B Road.

Parking will be developed only as the buildings are constructed, Wasukanis said, leaving vegetation on the site for as long as possible.

He said engineers have been researching paving material for the parking areas that will be semi-pervious, allowing stormwater to percolate into the ground rather than become runoff.

Ultimately, the campus will have 10 to 12 buildings for a total of about 650,000 square feet, but phase one will include three buildings over five to seven years, starting with one in the southwestern portion of the property, which is largely devoid of native trees. The first building, closest to Southern Blvd., is currently in the design phase.

The northern two-thirds of the property, about 50 acres, will remain natural through the first phase. “We will come back to council for phase two in five to seven years,” Wasukanis said.

The first building will be about 50,000 square feet with classrooms, internal and external student gathering areas, and a 250-seat meeting hall that will accommodate school and community gatherings, he said.

The three phase 1 buildings will total 180,000 square feet. The speed of the development will depend upon funding from the state.

Wasukanis said there is no definite timetable for development, although the permits are due to be in late this year. “If we get it in December, we intend to start the stormwater retention ponds as one of the first things,” he said, explaining that the fill from the ponds will be used to elevate the building foundations.