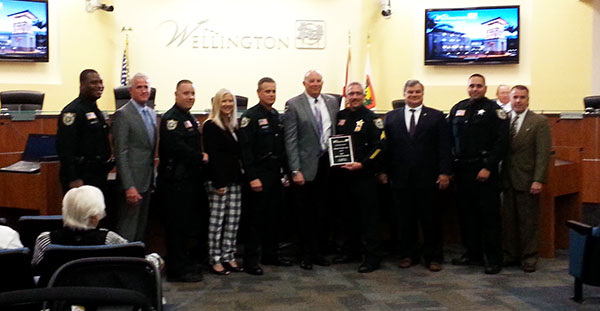 Reading from a recommendation from Sgt. Roy DeMarco, District 8 Commander Jay Hart said that since the Street Crime Unit was formed last November, it has collectively self-initiated about 100 narcotics cases that resulted in more than 100 arrests.

“They have seized more than 5,000 grams of marijuana, as well as cocaine, assorted pills, heroin, hashish and other illegal narcotics,” Hart said. “These narcotics investigations have netted more than 20 vehicles and more than $30,000 in U.S. currency that has been seized for forfeiture.”

The narcotics investigations were also instrumental in identifying and jailing many drug suppliers in the Wellington area, Hart said.

“These arrests have had a direct impact on reducing criminal activity, as well as improving quality of life issues in many Wellington neighborhoods,” he said.

In addition to narcotics investigations, the unit’s deputies have arrested suspects in many burglary and stolen vehicle cases, and brought in many fugitives.

“As a result of their investigations, the deputies have executed numerous search warrants that have resulted in numerous firearms and large amounts of narcotics being seized, as well as one bulletproof vest that had previously been stolen in a burglary to a PBSO deputy’s residence,” Hart said. “Many of the investigations have identified people who have proven to be suspects in other criminal investigations, and as a result, these street crime unit deputies have helped solve additional crimes throughout Palm Beach County.”

Vice Mayor John Greene said the team’s effectiveness is reflected in the numbers.

“It’s a big reason why people choose to call Wellington home,” Greene said. “Thank you for everything you do.”

Councilman Matt Willhite said village officials normally interact with PBSO leadership, but pointed out that the street team members are out in the community.

“You’re dealing out there with our customers, our residents, the constituents of Wellington, and I appreciate the hard work you do in protecting them,” Willhite said.

Councilman Howard Coates complimented the unit on its accomplishments and said that the team’s presence proves that crime happens in Wellington, even though it’s touted as a low-crime village.

“It’s a reminder that there’s still work to do,” Coates said. “There’s a lot of stuff going on here, and I think the street team has been successful.”

Mayor Bob Margolis said he was honored to have the opportunity to ride with one of the deputies recently and that he learned a great deal about how the PBSO operates.

“I appreciate everything that you do,” Margolis said. “One of my goals for riding was to take a look at some of the opportunistic neighborhoods that I’ve been looking at since 2007, and I am amazed at what you have done.”

“I didn’t think Safe Neighborhoods would work, but I am here eating my hat,” he said. “The village and PBSO have done a phenomenal job… and I want to commend you all for taking an opportunity, seeing a problem and really finding a solution.”

Leal, an 18-year veteran, was introduced by PBCFR Battalion Chief Michael Arena, who said she began her career as a firefighter/emergency medical technician. She worked her way up through the ranks and, several years ago, was promoted to captain. Leal lives with her family in Wellington.

“She is constantly striving for perfection every day in her interaction with her people when she’s on calls, on emergencies,” Arena said. “Whether it be a fire or medical call, she is constantly showing judgment, compassion and all of those things that we look for in a company officer.”

One of the projects Leal has taken on is firefighters’ fitness.

“She has been a proctor in our work fitness program that we’ve been working on over the last couple of years that we’re getting ready to fire off in November of this year,” Arena said. “She has done a lot of personal work with that, a lot of personal physical training, along with other people in the department who need assistance.”

Leal is also the liaison for Wellington’s Incident Management Team and sits in at the Wellington Emergency Operations Center when incidents arise.

“She is a constant asset to us,” Arena said. “She dedicates her time whenever I call her. If there is a project to be done, she is always there. She always answers her phone whether she is on duty or off duty. She is always willing and able to do whatever is necessary.”

Councilwoman Anne Gerwig said PBCFR is a great partner with the village and pointed out that members work in the community far beyond emergency services. “I appreciate that on behalf of the residents,” she said.

Willhite congratulated the department on its professionalism.

“It’s only 10 percent of the population who picks up that phone to dial 911 that actually needs something, and that population is met with people who are professional, well-trained and courteous,” he said. “You are an example of that, so thank you for the work that you do in Wellington. Obviously, living here, you understand how important it is to give back to your community.”