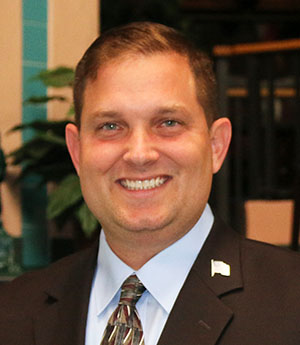 Republican Stuart Mears is challenging incumbent Democrat Mark Pafford for the District 86 seat in the Florida House of Representatives.

District 86 includes Wellington, Royal Palm Beach and Loxahatchee Groves, along with other communities to the east.

A fourth-generation Floridian, Mears grew up in the area, graduating from Lake Worth High School in 1992 before enlisting in the U.S. Army.

Mears, 40, graduated from Palm Beach Community College with an associate’s degree, and from Florida Atlantic University with a bachelor’s degree in political science and a certificate in peace studies.

He taught at Grassy Waters Elementary School for five years before returning to college, where he earned a master’s degree in educational leadership from Nova Southeastern University. He then took an administrative position with the Palm Beach County School District.

“For the past six years, I have been in adult and community education, which primarily focuses on ESOL students as well as GED for non-traditional students who maybe want to give it another crack,” he said.

Mears lives in Wellington’s Olympia neighborhood with his wife and three children.

An educator by profession, he also has a real estate license to supplement his income.“That has helped me weather the storm to continue to provide for my family over the last 10 years,” he said.

Mears believes his top accomplishments are being a teacher and giving back through education.

“I’ve always taught in Title 1 schools,” he said. “Those kids are by far the greatest return on investment. When the light bulb goes on, it’s the most amazing thing in the world.”

He is also proud of his four years in military service and of his 15-year marriage.

As a Realtor, he said he has made it his business to try to help clients get out of difficult financial situations, and has been an advocate of short sales or alternative solutions such as refinancing so clients don’t lose their homes.

Mears believes that he is best qualified to be the area’s state representative because of his educational background, his experience growing up in the restaurant business and his real estate experience. He added that his life experience and common sense lend to his qualifications.

His top goals if elected include trying to do away with the Common Core curriculum, giving teaching back to teachers and being a voice for teachers.

“I would love to open the door to get back to teaching, not just testing and more testing,” Mears said. “I live and see every day what it does to our kids.”

He feels that the voice of educators is missing from Tallahassee.

“Teachers do not get paid enough for the job that they do,” he said. “They also are not evaluated fairly, in my opinion. Teachers are evaluated on test scores and student performance, which I feel is relevant, but it can’t be the biggest piece of the pie.”

He would also like to lower taxes and reduce regulation on businesses.

“I believe businesses would expand payroll if it cost them less to be in business, and if it was easier for them to get into business without all the red tape,” Mears said.

He would also work to reduce the impact of the real estate market.

“Yes, it’s getting better,” he said. “It’s improving slowly but surely, but there has to be ways to advocate for families who have to react to the economy. Maybe they’ve lost their job or lost some income. There have to be some mechanisms in place to allow them to stay in place.”

Things he would do specifically for central Palm Beach County include improving education and the job market, and helping with the home crisis.

Mears thinks the legislature can improve the state economy by subsidizing businesses or giving them tax breaks or incentives so they can increase their payroll.

“The more jobs there are, the more revenue that is created,” he said. “Jobs and revenue aren’t created by expanding government.”

He believes the state budget should allocate more to educating students.

“They are our future and probably the greatest investment we can make,” Mears said. “If that includes paying our teachers better, improving the infrastructure for our schools, making sure that technology is available, and making sure that things such as technology and computer-based testing and all these things that are implemented are actually funded for years to come so districts don’t go scrambling looking for money after the fact, that probably would be a good idea with the budget.”

Mears believes the current education policy in Florida is too complicated and should refocus on the basics.

“I don’t care for Common Core,” he said. “I think we need to get back to reading, writing and arithmetic, allowing the teachers to teach and students to learn, and to develop a love for learning, not anxiety.”

He differentiates himself from his opponent in that he was born, raised and educated in Palm Beach County. He also has experience in business and is a veteran.

“I’ve spent many years in the classroom teaching our kids, so I have a more realistic view of what the education system is like, both on the inside and the outside,” he said.

One thing he disagrees with that the legislature did in the last session was approve a privately financed needle exchange program because it appears to be backing off from the war on drugs.

Among the three proposed constitutional amendments on the ballot, he hopes to see medical marijuana fail as it is currently written.

“I believe that I would advocate to rewrite it so that it is more specific in terms of what it can be used for, and who has access to it,” he said. “What I’m fearful of is that it can and will get into the hands of children, and that it can and will get in the hands of folks who say, ‘I stubbed my toe, I need some pot.’ That’s tough for me. There are real diseases out there like cancer; I lost my father to cancer. If medical marijuana would have eased his pain or improved his quality of life, sign me up. I get that.”

As for the proposed amendment that would provide funding for a land acquisition trust fund, he would prefer incentives for private investors to preserve land.

“Yes, it’s important to protect our environment, but I also don’t like the idea of the state being in the business of buying up land,” he said. “A private entity might do that better. Maybe there’s other ways of preserving land such as giving businesses and corporations incentives for buying a tract of land and preserving this piece because it’s something the taxpayers and the state don’t have to pay to maintain for years to come.”

To help mitigate flooding issues, such as what arose in The Acreage and Wellington after Tropical Storm Isaac, Mears said that as a legislator, he would work with whatever organizations are involved to provide the necessary funding to ensure that drainage and flooding is not an issue in the future.

Mears would prefer to look to those experienced in the field for suggestions. “I don’t know what the answer is,” he said. “I’m not an expert in that field. I certainly would like to hear from the experts in the field and the U.S. Army Corps of Engineers to ensure that there’s a fix for the problem.”

As a Realtor, he thinks the planned Minto West project is a good thing, but as a resident, he favors slower, more measured growth.

“I also think that there’s a middle point to this,” he said. “I think that growth is important. We’re seeing a lot of influx from southern Florida, Miami-Dade and Broward, moving this way. Growth is inevitable, but I do believe that we need to do this in a slow fashion. Growth I’m OK with. Overgrowth or too rapid of growth, I would advise against. There’s a lot of folks out in the Loxahatchee/Acreage area who moved out there and bought property to live a certain lifestyle.”

As for the growing popularity and support by the legislature of charter schools, Mears said he thinks they do fill a void.

“Not every child is the same,” he said. “Being a classroom teacher, I can tell you, if I couldn’t get the job done working with parents, working with specialists with the district and teachers, if the child still had a need, maybe that need is better filled somewhere else.”

Although the legislature appears to have embraced private and charter schools, Mears still believes in public education. “Do I think charters should just come in and wipe it all out? No. Can it improve? Yes,” he said.

He thinks changing the curriculum is only hurting public schools. “Quit moving the target,” Mears said. “The other part is teachers. Make Florida the most competitive state in the nation for educators.”

Mears is running as a Republican in a district that trends Democratic. However, he believes that his family being in the district for generations and his growing up here and serving the community as an educator give him added leverage.

“Anybody who knows me knows I’m about common sense, and I’m about working with anybody and everybody for a common good, not for a party,” he said.

He considers his top strength to be working with other people and meeting in the middle with all people at the table. He considers his weakness to be having a hard time saying no to taking on additional tasks.

He considers Pafford’s top strengths to be that he is well-spoken and has experience in the legislature. He feels that Pafford’s weakness is that he supports Common Core.

“I think he misunderstands just exactly what our educational system, parents and students included, are dealing with, and with the anxiety that’s coming out of Common Core implementation,” Mears said.

He said voters should vote for him because he has a passion for his community. “I’m doing this for all the right reasons,” Mears said. “It certainly isn’t financially driven. I just want to bring common sense to the community.”