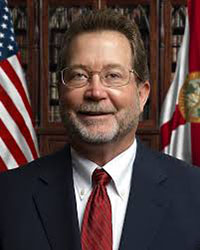 Hastings, who has served in the U.S. House of Representatives since 1993, is widely favored in the race. The district trends strongly Democratic.

Bonner moved to northern Palm Beach County at age 9 in 1963 and grew up attending public schools. As a businessman with a professional land surveying business that has been in operation for more than 27 years, he has set firm roots in the community.

A faithful church member for more than 25 years at Northlake Church of the Nazarene, Bonner has been heavily involved in the workings of the church and the community. “Prior to the call to run for office, I was the youth pastor there, the praise team leader there, corporate secretary and volunteer youth pastor,” he said.

Bonner sees problems with the country and hopes to make changes as the Republican candidate.

“I believe that we’ve reached a point in our country where we’ve got to save America,” he said. “I have demonstrated my ability through the Department of Criminal Justice to engage the faith communities, and reaching the needs of our families and our youth with the Department of Juvenile Justice. I believe that I’m being led to rally our faith and community partners to save America.”

Bonner believes his community experience makes him the best person for the job.

“I would be a better candidate of the two candidates,” he said. “I am a professional land surveyor and a man of faith who has demonstrated his work in the community.”

Putting a strong emphasis on character and faith, Bonner believes that his work building community relationships has prepared him for the job.

“In essence, I listen to what the community needs, and then I look for resources,” he said. “The key at the congressional level is relationships, and currently, the Congress is a Republican Congress, and there’s a high likelihood that the Senate will be a Republican Senate this year. The best opportunity our community has for being able to bring home, or to relate with those who have the resources, would be part of the party that’s actually making that happen.”

“I’m very upset about the fact that we have not been able to sustain our budget and get a working budget,” he said. “Not only do we need to end up having a balanced budget, but we need to end up creating a surplus to the budget to pay off the debt. This stranglehold of money that has been placed upon us is a burden that’s being placed upon our children.”

One fear Bonner has heard about repeatedly is the possibility of an Ebola outbreak.

“One of our greatest fears, I hear across the county right now, is if an endemic, an outbreak, happens south of the border, and we see an influx of refugees or those fleeing the disease from South America coming across the borders and bringing that disease with them,” he explained. “We need to have security of our borders, just simply for the safety and protection of we, the citizens of the United States.”

Bonner is very critical of problems in the Veterans Administration healthcare system.

“I’m very concerned about trying to expand on our national health initiative when, in fact, we’re not able to take care of our military personnel and what their needs are,” he said.

Looking to gain votes come Nov. 4, Bonner is ready to use his relationship skills to earn the trust of the people, to hear their needs and bring resources where they are needed.

“I am not a politician. I have not given our country $18 trillion of debt. I support our military,” he said. “I support strengthening our communities through character and family, and I’m looking forward to a change.”