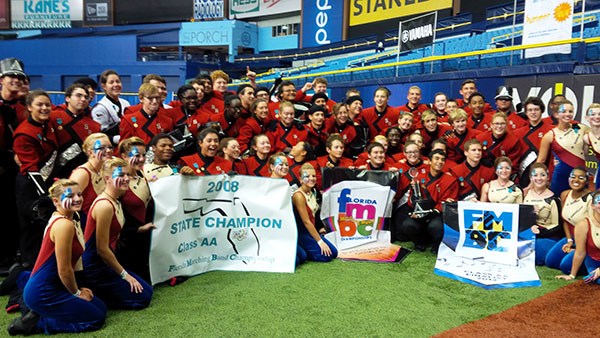 The band swept all categories — Best Music, Best Visual and Best General Effect — in the semifinals, then went on to perform again at the finals and won Grand Champions.

Director Daniel Harvey and his band staff have been working with the students since June on their winning show, called “Three American Masterpieces,” which emphasize the American traditions of baseball, jazz and the U.S. Constitution as its theme.

The SRHS band parents and band staff are proud of the hard work and hundreds of hours that the students have put into their rehearsals this year — and to bring home the championship was worth every moment.
ABOVE: The Seminole Ridge High School Winged Regiment marching band at the Tropicana Dome.