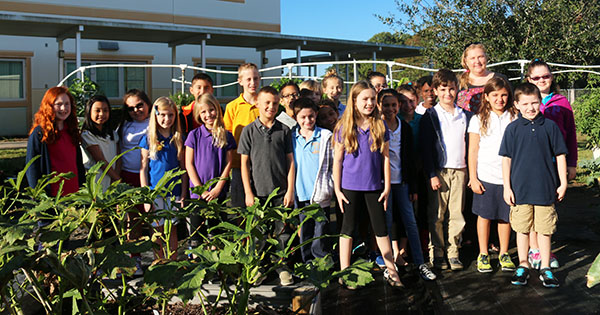 It is almost time to harvest Elbridge Gale Elementary School’s new teaching garden, privately funded by the Michael and Annie Falk Foundation, as part of a partnership between the American Heart Association and the School District of Palm Beach County.

American Heart Association representatives Megan Weinstein, Barbara Bogart and Drew Backoff were on hand Wednesday morning to observe the school’s integration of some of the organization’s 30 lesson plans.

Before the tour began, Principal Gail Pasterczyk recounted a story from Laura Arena, garden club sponsor, about the children harvesting green beans. “Some of the students said, ‘Well, I don’t like green beans.’ They started snapping them fresh just right off and eating them,” Pasterczyk said. “They were like, ‘These are green beans?’ They had only had either frozen or cooked green beans.”

Now, Pasterczyk said, the students all like their green beans. “This is what it’s all about,” she said. “It’s so exciting that now all these children who didn’t think they liked this vegetable can say, ‘Oh, we can get fresh green beans, and I will eat them.’ It doesn’t get better than that.”

The idea that if children are involved in the growing process, they are more likely to try the vegetables, like them and eat them, really works, Bogart said.

The tour began in the garden, where students explored, checking in on the vegetables. Afterward, the group headed to Arena’s second-grade classroom, where she was reading Tops & Bottoms by Janet Stevens to the students.

Fourth-grade teacher Jen Tobin was teaching her class about fruits and vegetables, and teachers Judy Benjamin and Raquel Gandy also read Tops & Bottoms to their classes.

Meanwhile, Nicole Crane led art students in painting rocks to serve as markers for the gardens. The focus of the day was painting red, orange and yellow tomatoes and peppers.

Shannon Anderson encouraged students to create a healthy plate by sorting bean bags labeled with food items into a healthy meal consisting of at least one fruit, vegetable, carbohydrate and protein.

ABOVE: Emily Sagovac’s fourth-grade class in the garden.