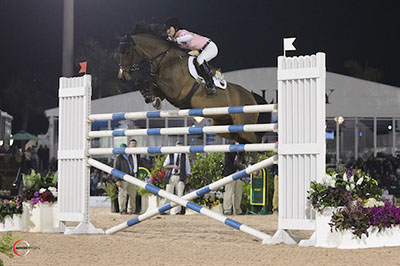 Nearly 4,000 spectators packed the house at the Palm Beach International Equestrian Center last Saturday night to watch the men and women duel for bragging rights as the winners of this year’s edition of the $75,000 Battle of the Sexes at the 2015 Winter Equestrian Festival.

The women had won the competition for six consecutive years up to this point, but settled for a tie in the end after several demanding rounds of competition and a lot of exciting action.

Eric Hasbrouck was the course designer in the International Arena at PBIEC for week one competition and set the tracks for Saturday’s classes. In the highlight $75,000 Battle of the Sexes, the three-phase contest included speed rounds, match races and a six-bar competition.

The first round of competition was the speed round, with a six to four win for the men. The match races followed, with the men and women competing side by side over identical courses and the faster rider winning a point for their team. The men were victorious again with a win, 6 points to 4, bringing the total to 12 to 8.

The final six-bar competition was the deciding factor of the evening. Four men and four women returned from each team with the opportunity to earn two points per clear round. The competition started at 1.60m (5’3”) in height with two clear rounds for the women and three clear rounds for the men, taking the tally up to 12 and 18. A second round was held with the final jump at 1.70m, where the women’s Alison Robitaille was the only rider to jump a clear round, taking her team’s score up to 14 versus the men’s 18.

Robitaille and her mount Cassinja then went on to jump two more clear rounds to help their team earn additional points. The pair easily cleared a four bar set up to 1.75m (5’7”) and then jumped one more clear round with the final fence at 1.80m (5’9”) to tie it up, 18-18.

A final tie-breaking round was held with one man and one woman from each team returning to jump the four bar one more time, with the final jump set at a staggering 1.85m (6’). Alex Granato went first for the men riding Mullaghdrin Rado, and Candice King returned for her team aboard Bugatti VDL, but both pairs had the top rail down at the final jump. The team captains conferred and decided to remain tied and save their horses for another day.

Although both teams wanted to win, the riders were happy with their horses in the evening and agreed that the competition was a lot of fun. Robitaille was competing in the class for the first time with her horse Cassinja and never thought she would end up jumping so many rounds for her team.

“I am really happy with my horse,” Robitaille said. “She is my grand prix horse, but I don’t think that she has ever jumped that high. She has jumped one or two 1.60m rounds. She is just turning ten and she did a couple of bigger classes down here last year and then I broke my shoulder, so she had an easy rest of the year. I got her back in a couple of grand prix classes at the end of the year, but nothing of this caliber. I was definitely not expecting to jump that many rounds.”

Along with jumping the final round for the men’s team with Mullagdhrin Rado, Granato had a great evening aboard Zenith Dance, with the fastest round in the speed phase and an equally blazing time in the match races.

“Zenith Dance is a super horse. He is a fun speed horse,” Granato said. “I ride for the owners, and they have been good supporters. I did that horse about a year and a half ago in some grand prixs as an up-and-coming horse and then he spent last year doing the junior jumpers with Maddy Darst on lease. Now we have him for sale and we just got him back, so this is my first week showing him again. He had only done regular speed classes, and I don’t think he has ever been under the lights in a venue like this, but he was game.”

Granato jumped in this class two years ago, but only did the first two phases, and he enjoyed taking part in the whole competition this year.

“I think it is a lot of fun,” he said. “It is great to get the teams together. It maybe got a little heated coming down to a tie this year, but it is a fun venue and it is fun to have the crowd that involved. I think it is a good way to start the circuit with the crowd coming out.”

ABOVE: Alison Robitaille and Cassinja cleared 1.80m in their final round. Photo by Sportfot