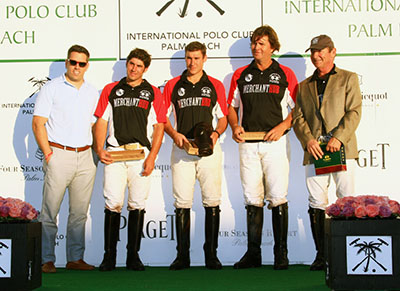 The 19-goal Merchant Hub team received one goal by handicap, but FlexJet scored the first goal of the game on a 30-yard penalty conversion from Aguero for a 1-1 tie. Astrada made it 2-1 on a goal from the field with 1:34 left in the chukker.

Merchant Hub came alive in the second chukker with goals from Marianito Obregon and his brother Facundo Obregon for a 3-2 edge. Astrada leveled the score at 3-3 with a goal in the final 48 seconds of the chukker.

Escobar scored the go-ahead goal in the opening 30 seconds of the third chukker for a 4-3 Merchant Hub advantage. Astrada converted a 40-yard penalty shot for a 4-4 score. Bollini and Marianito Obregon traded goals to end the first half deadlocked at 5-5.

Fifth chukker action got underway with Marianito Obregon scoring the first goal of the period, and his brother adding the second as Merchant Hub stretched its lead to four goals, 9-5. Astrada got FlexJet on the scoreboard with a 40-yard penalty conversion, 9-6, adding a goal from the field moments later to cut the Merchant Hub lead to two goals, 9-7. Facundo Obregon closed out the chukker by scoring from the field with nine seconds on the clock. With one chukker left to play, Merchant Hub held a 10-7 advantage.

FlexJet pressed the attack in the sixth, with shots being blocked or going wide of the goal. Astrada converted a 30-yard penalty shot with nearly six minutes left to play, but that was where it ended. Escobar scored on an impressive angle shot from just off the end line that gave Merchant Hub the security goal they needed as they rode on for the 12-8 victory.

Joe Barry Memorial Cup action continues this weekend at IPC with the final slated to be played on Sunday. Learn more at www.internationalpoloclub.com.