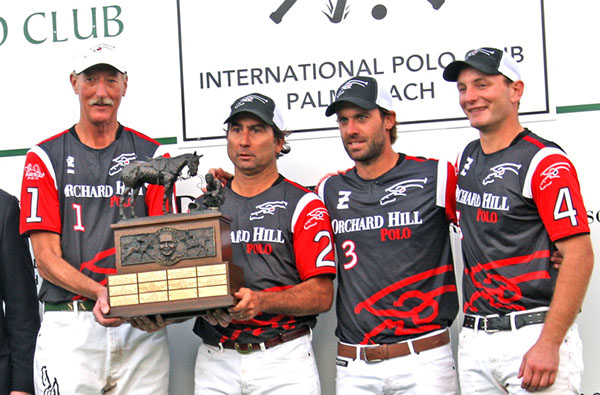 Between the two teams, two of the best ball control artists in the game were on the field. Orchard Hill boasted the talents of 10-goaler Facundo Pieres, while Villa Del Lago saddled up with 9-goaler Polito Pieres (recently elevated to 10 goals in Argentina). The Argentine cousins were high-scoring machines who regularly carried the ball through seemingly impassable defenses to score.

Orchard Hill’s Facundo Pieres opened the scoring with the conversion of a 60-yard penalty shot, 1-0, in the first 80 seconds of play. Julian de Lusarreta responded with a goal from the field two minutes later to tie the game at 1-1. Polito Pieres scored on a 30-yard penalty shot two minutes later to give a 2-1 lead to Villa Del Lago. Facundo Pieres leveled the score at 2-2, scoring the final goal of the period with just 43 seconds on the clock.

The pace continued to heat up as the second chukker got underway. De Lusarreta scored for Villa Del Lago with just 32 seconds off the clock, 3-2, followed by a 40-yard penalty goal from Polito Pieres at the 5:41 mark for a 4-2 lead. Facundo Pieres scored a goal from the field with Polito and Facundo exchanging penalty goals to close the chukker with Villa Del Lago in the lead, 5-4.

Facundo Pieres tied it at 5-5 in the opening 30 seconds of the third chukker with a beautifully executed neck shot. Polito Pieres took the lead back for Villa Del Lago, 6-5, at the 4:17 mark. Facundo Pieres ended the chukker with consecutive penalty goals from 40 yards and 60 yards for a 7-6 halftime lead for Orchard Hill.

The pace continued to quicken as the second half of play began. The ball moved up and down the field at breakneck speed, with both Facundo and Polito giving an exhibition of ball handling on the polo field.

Facundo Pieres went on a tear in the fifth chukker, scoring the opening goal on a 30-yard penalty conversion in the opening seconds of play, 10-9. He followed up less than a minute later with a 130-yard neck shot for a goal and then took the ensuing throw-in and raced 150-yards down the field to score the go-ahead goal, 11-10. Facundo scored his fourth consecutive goal from a melee in front of the Villa Del Lago goal to make it 12-10. Polito Pieres and Lucas Criado traded goals to end the chukker with Orchard Hill in the possession of a 13-11 advantage.

Polito Pieres cut the Orchard Hill lead down to 13-12 with a goal in the opening minute of the sixth chukker. Criado scored less than two minutes later, making it 14-12. De Lusarreta scored to bring Vila Del Lago to within a goal of the lead, 14-13, but Orchard Hill was not going to let the game slip away. With 2:11 on the clock, Facundo Pieres scored the final goal of the game for the 15-13 victory.

English 6-goaler Mark Tomlinson has played against both Facundo and Polito and had some observations from the sidelines.

“Polito probably has the best stick work of all the top players,” he said. “His close ball control and skills are phenomenal. Facundo is a serious winner, and that’s what most strikes you when you play against him. When he needs to turn it on he can. I was fortunate enough to be on the winning Halcyon Gallery team against Facundo playing for Zacara in the 2014 British Gold Cup quarterfinals. It’s going to be interesting watching the winter season unfold.”

Facundo Pieres scored 12 goals in the game (five on penalty conversions) and was named MVP for his efforts. Criado was credited with two goals, and Van Andel added a goal for the win. Polito Pieres scored five of his team-high nine goals on penalty shots for Villa Del Lago. De Lusarreta picked up four goals in the losing effort.

The high-goal polo season continues at IPC this weekend with the Ylvisaker Cup. Learn more at www.internationalpoloclub.com.