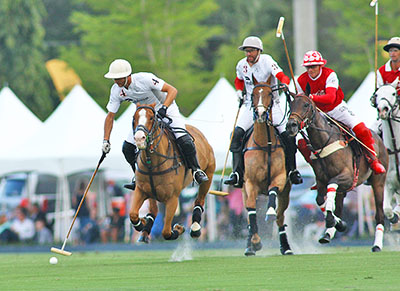 Argentine 9-goaler Pieres scored the first goal of the game to give Villa Del Lago an early 1-0 lead, but the celebration was short-lived. Less than a minute later, Arellano tied it with a 30-yard penalty conversion. Pieres responded with a 60-yard angled shot from the field for his second goal of the game. Arellano tied it at 2-2 with 1:35 left in the chukker, and team captain Gillian Johnston gave Coca-Cola the lead with the final goal of the period, making it 3-2.

Arellano stretched the Coca-Cola lead to two goals, 4-2, with a scoring shot in the second chukker. Pieres responded with a goal from the field just a minute later, and teammate de Lusarreta tied it at 4-4 with his first goal of the day. Arellano scored the go-ahead goal with 2:23 on the clock to give the lead to Coca-Cola, 5-4. A penalty and ensuing technical foul called on Pieres allowed Arellano to convert the penalty shot for a goal and watch Pieres get ejected for the remaining 1:23 of the chukker. Playing four on three, Arellano notched another goal to put Coca-Cola on top, 7-4.

Pieres wasted little time redeeming himself as he scored the opening goal of the third chukker in the first 25 seconds of play, making it 7-5. Erskine scored his first goal of the game to keep Coca-Cola on top by three goals, 8-5. Pieres converted a 40-yard penalty shot to end the scoring in the first half with Villa Del Lago trailing, 8-6. Goals were hard to come by in the fourth period as Arellano converted a penalty shot with just 3:34 left to play. Pieres scored a goal from the field, but it was Coca-Cola with the 9-7 lead entering the fifth chukker.

Pieres led all scoring with 10 goals. Obregon scored twice and de Lusarreta added a goal for the win. Arellano scored seven of his team-high nine goals on penalty conversions. Erskine was credited with two goals, while Johnston scored once in a losing effort.

Joe Barry Memorial Cup action continues this weekend at IPC with the final slated to be played on Sunday, Jan. 25. Learn more at www.internationalpoloclub.com.