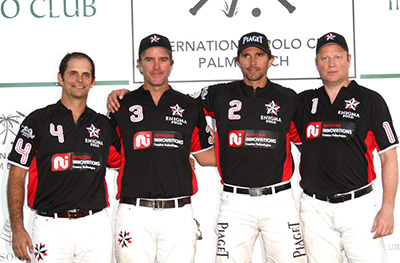 Lead changes, momentum shifts, missed penalty shots, lost opportunities to win the game in regulation time, horse races, bumps and ride-offs galore were all mixed into a match that saw Enigma’s MacDonough take the ball down the field in the final seconds of the sudden-death overtime period to score the winning goal in a 14-13 game.

Obregon scored the first goal of the game less than two minutes into play for the early 1-0 Palm Beach Illustrated lead. Hall countered with a goal from the field to tie it up at 1-1 in a low-scoring opening chukker.

Hall and MacDonough teamed up for consecutive goals in the second with Hall being on the scoring end of a pair of passes from the Argentine 7-goaler for a 3-1 lead. A 30-yard penalty conversion by Obregon cut into the Enigma lead to make it 3-2. Palm Beach Illustrated team captain Zenni tied the game at 3-3 with the final goal of the period.

The Enigma offense opened up in the third with the team being the recipient of a goal on a Penalty 1 against Palm Beach Illustrated. Hall added two goals, and Enigma team captain Wirth added a goal, for a 7-3 advantage. Obregon scored the final goal of the first half on a 60-yard penalty shot that left Enigma in the lead, 7-4.

The pace slowed a bit in the fourth chukker with the two teams trading goals. Hall opened the chukker with a well-executed neck-shot from over 80 yards for a goal, making it 8-4. Dorignac answered back with a goal to cut the lead back to three goals, 8-5. Obregon scored with 1:51 left in the chukker to bring Palm Beach Illustrated to within two goals of the lead, 8-6. A Palm Beach Illustrated foul sent Arellano to the penalty line, where he converted a 40-yard penalty shot with 35 seconds left in the chukker, putting the three-goal Enigma lead back in place, 9-6.

A reinvigorated Palm Beach Illustrated team took control of the game as they returned to the field in the fifth. Dorignac started the period going with a goal from the field less than two minutes into the chukker, followed by a 60-yard penalty goal just 40 seconds later, making it 9-8. Zenni tied it at 9-9 midway through the period on a goal from the field. Consecutive penalty goals from Obregon were capped by Dorignac’s second goal of the period. Palm Beach Illustrated rode into the chukker with a three goal deficit and ended it with a three goal lead, 12-9.

Obregon made it 13-9 with his eighth goal of the match, but that was when Enigma came alive. Three penalty goals from Arellano and a goal from the field from MacDonough leveled the score at 13-13, forcing the sudden-death overtime.

After a brief intermission that allowed the players to bring in fresh mounts, play resumed in an overtime chukker.

Both teams had opportunities to win the game with shots going wide and a penalty shot missed. With time running out and Obregon in hot pursuit, MacDonough raced more than 100 yards down the field to score the winning goal for Enigma with just 42 seconds on the clock.

Hall led the Enigma attack with five goals on the day, earning himself MVP honors for his efforts. Arellano scored all four of his goals on penalty shots. MacDonough added three goals, including the game winner, and Wirth scored once for the win. The team also received one goal on a Penalty 1.

Obregon led all scoring with eight goals (five on penalty shots). Dorignac was credited with three goals, and Zenni added two goals in the loss.