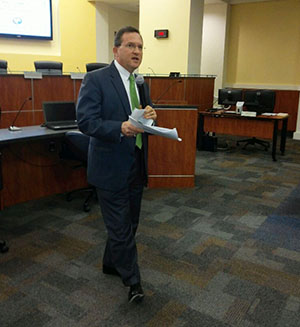 State Rep. and House Minority Leader Mark Pafford (D-District 86) conducted a town hall meeting on Thursday, Jan. 29 at the Wellington Municipal Complex to review the past and upcoming legislative sessions, and inform those attending on how they can become advocates for legislation.

Pafford, who will leave office next year due to term limits, will return to Tallahassee for the upcoming annual legislative session, which begins March 3.

He pointed out that all bills are available for review at www.myfloridahouse.com.

“Generally speaking, legislative leaders don’t file bills,” Pafford said. “There’s a point to that. You don’t want to have people come to you and hold a bill hostage and force your hand in deciding where the caucus may want to go. I was actually glad not to file any bills this year. It’s nice to concentrate on the big picture and try to understand a lot about legislation and where the legislature is going to go over the next several months.”

He added that he has a newsletter, Pafford Postings, available by calling (561) 682-0156 or by e-mailing mark.pafford@myfloridahouse.gov and writing “subscribe” in the subject line.

“We actually do work along with each other very, very well,” he said. “It’s one of those little secrets, but it’s kind of how we keep each other in check. We try to seek some level of fairness in everything we do. We’re here to serve our constituents.”

Despite partisanship at some levels, he pointed out that he and State Rep. Patrick Rooney (R-District 85) work very well together, especially in the Palm Beach County Legislative Delegation on county issues.

“Sometimes the partisan politics disappear, and it’s really refreshing to deal with that because it doesn’t happen that often,” Pafford said.

He said anyone interested in becoming an advocate should know who their legislators are and what they do, which is also available at www.myfloridahouse.com.

Using his own profile as an example, he pointed out that he is CEO of the Arthur R. Marshall Foundation for the Everglades and that he has a bachelor’s degree in public administration with a minor in political science from Florida International University. He is married and has two children. He was born in Miami-Dade County and is Jewish.

“A lot of people don’t know that with a last name like Pafford,” he said. “You should know a little bit more about the people who represent you. You can connect, and that’s really important on so many of the issues.”

Legislation can be tracked in detail on the web site. Users can sign in and updates for specific legislation will be e-mailed to them.

“You can set up an account and it will e-mail you,” Pafford said. “The system is really built to help you understand all the stuff that’s really great or complete nonsense, and we do a lot of both. We do it one thousand eight hundred and something times.”

All the bills filed in the upcoming session and past sessions are on the web site, and can be found by the bill number — Senate bills are even-numbered and House bills are odd-numbered — by all or part of the official title, part of the text and sometimes by the bill’s nickname. All the meeting dates and times, amendments, action packets, e-mails and other related information is included, as well as the names of all the subcommittees the bill will go and the names of the members, and the current status of the bill.

“You name it, and it’s there,” Pafford said, crediting technology with advancements in availability of information. “You can print this stuff out quite easily.”

The web site also has staff analyses that are helpful in understanding what the bill would do.

“Generally speaking, they have to be written in a way that everybody can understand,” he said. “I can tell you after 16 years, I still don’t all the time, which is why we have staff and all of you guys, because a lot of you are experts, and sometimes that can influence this process.”

Pafford said the process can be especially frustrating when legislators are trying to advance policy for their constituents. “That’s what the process is all about,” he said, explaining that the presence of advocates can sometimes make a difference.

The web site also has a full list of how individual legislators voted after final reading of the bill.

“It’s color-coded,” he said. “You can determine on any bill how we voted, whether it be in committee or on the House floor; you can go through that and determine for yourself what your representatives did. At the end of the day, if it’s not the color that you expect, you should never vote for somebody, no matter how nice they are or how they smile or whether they know your name, it’s what counts inside and how they deliver that for you on the House floor.”

To be an effective advocate, he said that advocates need to build a coalition, determine exactly what they are asking for, get organized and strategize. Find out who they need to lobby, and find a bill sponsor. They should attend Palm Beach County Legislative Delegation meetings and sign up to be a presenter, and attend committee meetings in Tallahassee, if possible.

Pafford said he thinks top issues in the 2015 session will include expanding healthcare in Florida and protecting land and water under Amendment One, which passed on Nov. 4 by a 75 percent margin statewide and dedicates funds to acquire and restore Florida conservation and recreation lands.