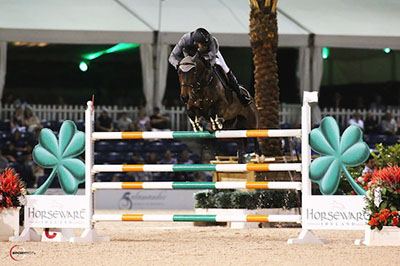 Michel Vaillancourt set the grand prix course at the Palm Beach International Equestrian Center with 45 competitors and six clear rounds. In the jump-off, Rojo guided Gianni Gabrielli’s Percine Dream to the first clear round in 48.38 seconds to eventually finish second. Freddie Vazquez and Messenger Hill’s Zippo Z followed with four faults in 52.47 seconds to place fifth. Nusz and Amalaya Investment’s SRI Aladdin were clear in 49.12 seconds to end up in third.

Ali Wolff and Blacklick Bend Farm’s Casall placed sixth after a refusal and a rail down on the short course in 57.78 seconds. Kent Farrington and Robin Parsky’s Blue Angel followed with the fastest time of 46.94 seconds, but knocked a rail at the final fence to finish fourth.

Last to go, Rodriguez and Arao Enterprises LLC’s Caballito cleared the track in 48.13 seconds for the win.

“I’m very happy,” Rodriguez said. “I saw the jump-off start. Juan was pretty fast, but I knew Kent was going to go faster than him. It is a very lucky night when you have Kent in front of you in the jump-off. I was thinking something good was going to happen… This is my first grand prix win at WEF, and I have been here for six years, so this is a big night for me.”

Rodriguez has had a great winter in Wellington, including back-to-back wins in week eight’s $34,000 Ruby et Violette WEF Challenge Cup Round 8 and $34,000 Nutrena CSIO 1.45m Classic with his mount Fifty Fifty 111. Saturday night it was Caballito’s turn, and the 13-year-old Oldenburg gelding earned the biggest win of his career.

“My horses are really jumping great,” Rodriguez said. “This week is interesting for me because I entered in two 1.45m classes. I have always had Caballito as my main horse, and this year I have had more horses coming, so I said this week I was going to use him in the two 1.45m classes and try to get some world ranking points.”

“I bought him at the end of his eight-year-old year, and I won international classes with him four years ago, and he is still winning,” Rodriguez said. “We always try to buy new horses and think that they are going to be way better than him, and then championships and big shows come and we look at the barn, and the one who is ready to go is him. He is the one we can count on.”

Placing second, Rojo had a great night with Percine Dream and has also done well with his mount throughout the circuit. Originally from Argentina, Rojo lived and showed in Europe for many years and then moved to Venezuela. He got Percine Dream from a dealer in France.

“He said he thought she was a horse that can jump any class, and he was right,” Rojo said. “The mare went to Venezuela and was national champion. Then this is the first time she got a chance to go in big sport, and she is coming up with all the solutions. She was clear in a 5* grand prix already, so my hopes are very high.”

Third place finisher, SRI Aladdin, is a horse that Meagan Nusz bought in Wellington last year and has taken some time to get to know.

“I have kind of taken it slow with him. I think he has all the talent and all the scope to be a top horse, but he is a little bit unrideable,” Nusz said. “He is quite strong and he likes to go very downhill, which is not ideal for adjustment in lines. He is also very straight, so he doesn’t really move with the lines. You have to be very accurate and set him up way before the fence so he can give it a good jump.”

Yet she sees clear progress with her mount.

“Every time I get on him I know that I am so lucky to have one like that in my string,” Nusz said. “Tonight is the first of many for that one I think, and I am sure he has a win in there somewhere. He has really stepped up for me. This is only his second night class. He is really a trier, and I trust him so much. He is such a fun horse to ride.”

In addition to the night’s third-place prize, Nusz was presented the award for Leading Lady Grand Prix Rider, presented by Martha Jolicoeur in memory of Dale Lawler, for her success throughout the week.

Tom MacGuinness, owner and founder of Horseware Ireland, was also on hand for the evening and detailed his company’s long-term involvement with the horse show, having first come to WEF in 1987 to visit. MacGuiness saw the huge changes when he returned seven years ago, which is when Horseware Ireland became directly involved at WEF.

“I could really see that this was going to be the number-one venue in the world, and that is when we got serious about sponsoring here,” he said. “I don’t think we were wrong. Mark [Bellissimo] and his team are doing a hell of a job, and I think they are going to make show jumping into a spectacle like Formula 1 or the Indy 500. They have a good thing going here, and we are happy to support them.”