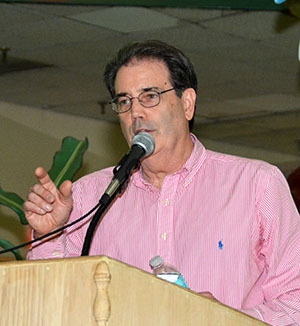 Pattison said that he is among 1,686 registered lobbyists vying for the attention of 120 state representatives and 40 state senators during the 60-day session currently underway.

“I can assure you that the conservation and citizen group is in the minority,” he said, adding that 1000 Friends of Florida has a web site that does weekly updates on the legislature when it is in session.

He pointed out that the recently passed Amendment 1, which will allot at least $760 million a year for land acquisition, land management and water quality improvements, will be highly contentious.

He noted that Amendment 1, which passed with 75 percent of the vote statewide, had the highest percentage in Palm Beach County, with almost 90 percent.

“As you might imagine, too, that kind of money in front of the legislature creates all kinds of challenges,” Pattison said. “Some people have very different ideas about how that money should be used… As of today, there’s no unified idea as to how best to spend that money.”

Conservation groups are promoting the idea that the money was meant to extend the Florida Forever program. “That’s what it should be used for,” he said.

1000 Friends is fighting several bills the group believes are adverse to conversation interests.

“I’ll mention Senate Bill 1244,” he said. “Anybody concerned with the Minto West project and what’s going on in western Palm Beach County should very much pay attention to this.”

It introduces a new term called “constrained agricultural parcels” less than 6,400 acres, of which 75 percent has to be in continuous agriculture. It has to have a minimum one-mile border of existing industrial, commercial or residential uses and a minimum of a mile of its boundary adjacent to areas that would prohibit those kinds of uses.

“I don’t think there are too many parcels in the state that would qualify other than the one here in Palm Beach County, probably the only one,” Pattison said.

It would also prevent a local government from having a comprehensive plan that would restrict the use of those parcels, he said.

“We’ve met with the sponsor of the bill, or at least his staff, and expressed some concern,” he said. “I think they’re starting to hear that people are not very enamored with this approach, and we’re hopeful the bill is going to be rewritten, but there’s not a certainty yet.”

The original version of another bill, Senate Bill 484, would have eliminated all regional planning councils in Florida and their functions.

“We objected to that with the realization that most of the issues that many of us face today are regional in nature,” Pattison said. They’re bigger than a single community’s ability to deal with it, and we think having regional planning councils is an important part of our growth and development process.”

An amendment has been presented by the senator who sponsored the bill that would protect the regional planning councils.

“We are hopefully going to be able to support that good change, and we’ll see if that can be maintained going forward,” Pattison said.

Senate Bill 562 would eliminate the state’s “developments of regional impact” (DRI) program, which requires careful scrutiny of developments with 1,000 dwelling units or more.

“This bill would actually eliminate that program and make it part of the newer growth management state-coordinated review process,” Pattison said. “We’re working to see if we can get some additions to that statute as it’s being proposed.”

Senate Bill 832, addressing sector plans larger than 15,000 acres, would limit the kind of information local governments can request when looking at those plans.

“It would eliminate the ability for a local government to ask about transportation and public infrastructure costs, the timing, the phasing, the location of those,” Pattison said. “We’ve argued that’s the kind of information local government needs to make an informed decision, not restrict it.”

“It’s meant to encourage high-tech highway type development in communities around the state,” Pattison said. “It’s sort of like a sector planning process without some of the details. We’re concerned that it’s a little vague in a lot of areas and can have some unintended consequences for Florida communities statewide.”

Senate Bill 1094 deals with coastal management and would require local governments to take notice of sea level rise and changes in sea level and come up with strategies to minimize the loss and damage from flooding or hurricanes. “We think it is something that is long overdue and are looking to support that,” Pattison said.

Water issues are important for both houses, but their approaches are different, Pattison said.

Senate Bill 918 focuses on springs and springshed protection and would create a water policy advisory council that would evaluate projects to improve water quality, while House Bill 7003 has no deadline for creating or establishing minimum flows. HB 7003 also delays the Lake Okeechobee cleanup, deletes an existing deadline for meeting water quality standards, and sets aside an existing rule that allows state agencies to require that discharges meet water quality standards.

Senate Bill 648 would repeal the ban currently in existence for spreading septic tank effluent onto land. “Most of the conservation groups are speaking out against that because of the water quality implications of that practice,” he said.

A committee substitute for House Bill 383 would amend the Bert Harris Act to give more authority to a citizen to argue that unconstitutional exactions have been applied to their property through comp plan or zoning restrictions.

“There have been cases where someone would be issued a permit, an adjacent neighbor would have damages, say flooding or something to that effect,” Pattison said. “They try to use the Bert Harris Act to claim damages, and this bill would eliminate that.”

Senate Bill 1312 is an “anti-SLAPP suit bill that would prevent a developer from filing a frivolous lawsuit against citizens who challenge the developer at a cost of thousands of dollars to the citizens.” SLAPP stands for Strategic Litigation Against Public Participation.

“This bill would actually prohibit that practice,” Pattison said. “It has not been heard yet, but it’s one that we’re very hopeful for.”

ABOVE: Charles Pattison, policy maker for 1000 Friends of Florida.